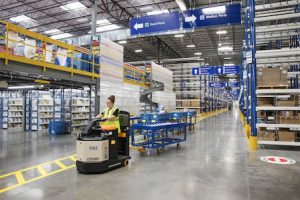 Fiat Chrysler Automobiles (FCA) in the US has invested $12.2m to open a parts distribution centre (PDC) in Winchester, Virginia. The 37,000 sq.m facility will handle 9.2m items annually across 50,000 part numbers and serve 200 dealers, mainly in the Mid-Atlantic region.

The 37,000 sq.m facility is the first of two PDCs the carmaker is opening this year under the Mopar service parts and customer care brand.

The Winchester facility will employ 70 people over two shifts. Ten inbound trucks will call at the PDC on a daily basis, with 24 trucks outbound.

The second facility is due to open in the Metro Detroit area in the fourth quarter of 2017 and represents an investment of $10.4m.

“We are celebrating our 80th anniversary in 2017, and throughout the years, customer satisfaction has been and continues to be the Mopar brand’s number one priority,” said Pietro Gorlier, head of parts and service (Mopar), FCA – Global. “This new PDC builds upon our mission, allowing us to more quickly and efficiently serve our dealers and customers, delivering the parts they need, when they need them.

"This is our 22nd PDC in North America and we’ll continue to expand our distribution network as the parts and accessories business keeps growing,” he added.