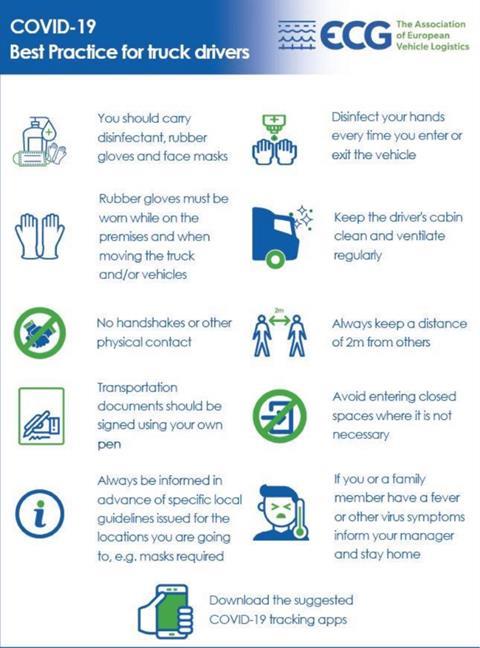 The Association of European Finished Vehicle Logistics (ECG) has announced a series of best practices to help protect car transporter drivers, vehicle compound workers and dealership staff from coronavirus. The measures were detailed by Wolfgang Göbel, the association’s president, at its Spring Congress last week (May 14), which was held online because of the pandemic.

Göbel noted that both private and professional lives had radically changed since March and that the vehicle logistics industry was now battling “something we haven’t experienced before and something we have not been prepared for to this extent”.

He admitted that “a lot of learning” had needed to happen about the virus and what could be done to counteract it, but said the ECG had been quick to develop a series of best practices.

He added: “From my point of view, [this best practice is] something which is not only good as a recommendation but should be a binding rule.” Regulations in some European states might have gone beyond these measures, but the vehicle logistics industry still required a common standard, he suggested.

“It’s very important that we come to a common understanding about how to protect our people and the business, especially now that at least part of the volume is coming back” – Wolfgang Göbel, ECG

Besides social distancing and avoiding enclosed spaces, the guidelines developed for drivers include wearing rubber gloves while moving car transporters and vehicles; keeping cabs clean and well-ventilated; signing documents with their own pens; and disinfecting their hands upon entering or exiting a vehicle (see infographic above)

“The receiving side, whether it’s a fleet owner or a dealer, has to be aware and has to do exactly the same. They have to be informed that the truck driver will come with the special hygienic rules, but they have also to be prepared on the opposite side to do the same, otherwise it will not work,” stated Göbel. 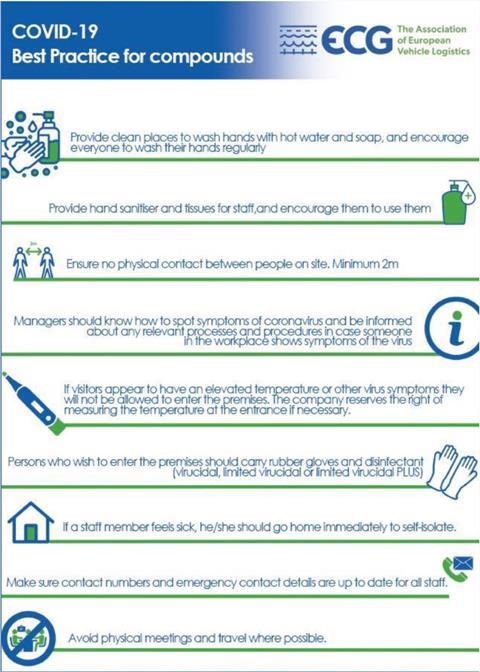 “I think everybody needs to protect their own operation and to make sure that this is not closed down by the government due to coronavirus infection or [as] a hotspot. It’s very important that we come to a common understanding about how to protect our people and the business, especially now that at least part of the volume is coming back.”

Volume is returning due to the reopening of some vehicle manufacturing operations in Europe, though it is uncertain what transport capacity will be required in the coming months.

“The second quarter, especially April and May, will be economically a disaster,” said Göbel. “The big question is, what will happen in quarters three and four?” – Wolfgang Göbel, ECG

“The first quarter was still ok; there was little impact in March. The second quarter, especially April and May, will be economically a disaster,” said Göbel. “The big question is, what will happen in quarters three and four?” The trajectory next year was also a concern, he suggested. 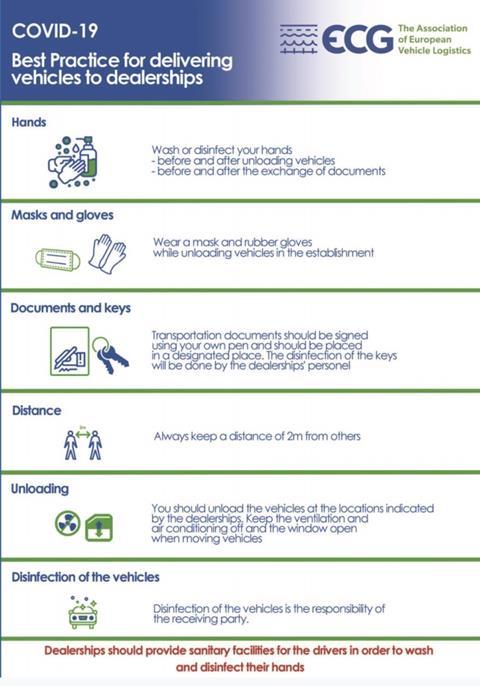 “Various aspects are not clear. What about stimulation coming from governments in the various markets?” He questioned whether there could be vouchers for car purchases, but also pointed out that some other industries, notably tourism, have been suffering worse than automotive.

“So, we will see. This [stimulation] has to be fast otherwise we will have even more consumer rejection. Forecasting is more than difficult,” Göbel stated. He urged ECG members to submit their data to help build a clearer picture over the coming months, during which the association will work with consultancy companies such as IHS, PWC and LMC.

The ECG is also working alongside Ultima Media, and the two partners have released a Global Vehicle Demand Forecast 2020-2030 which predicts that sales could drop to 15m in a best-case scenario, but could potentially fall as low as 13m in a worst-case