Soaring temperatures and a prolonged dry spell in Europe this summer means river levels are at an all-time low, most notably in the Rhine, which was closed to freight traffic this week.

Europe’s river and short-sea network carries more than 400m metric tons of freight per year, with an ambitious EU target to increase that by 25% by 2030 as part of the European Green Deal and the Sustainable and Smart Mobility Strategy. Ironically, inland waterway transport is currently restricted as rivers across the continent dry up because of the sustained lack of rainfall and high temperatures. 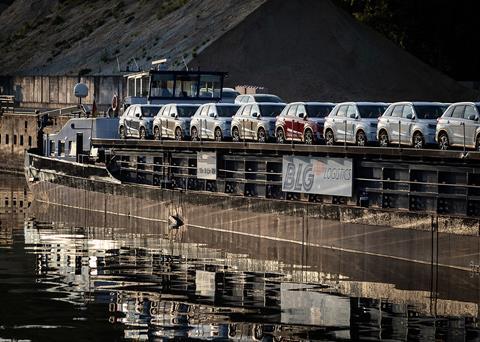 Germany is heavily reliant on its rivers for freight shipments, including for vehicle transport, as supported by BLG Logistics

The Rhine, which snakes from the Swiss Alps down through France and Germany to the Netherlands, is a much-used freight corridor and carries 200m tons of goods each year. However, this summer’s weather conditions mean it is at historically low levels.

Large areas of the Rhine have now been closed to cargo. In multiple places on the particularly shallow middle Rhine, levels are below 10cm, with Oberwinter the lowest at 6cm.

The Rhine typically experiences lower levels between July and October, but this has been exacerbated by the drought and the lack of snowfall in the Alps last winter.

Rain is forecast but may prove a temporary solution, without the Alpine snow melt to keep the river topped up. During the last previous closure, in 2018, levels took six months to fully recover.

Lightening the load
Ford, which ships Fiestas out of its plant in Cologne on the Rhine, began reducing the number of vehicles loaded per vessel by between 30-40 last week because of the shallower conditions but, as more of the riverbed becomes visible, freight shipments have become all but impossible.

Ford said it would have to reduce the number of vehicles per vessel to 20-25% of the normal load, equal to between 100-125 units, if the river dropped below 70cm, which it now has.

BLG-Interrijn Automobiltransporte, the joint venture between Germany’s BLG Logistics and Dutch ro-ro provider Interrijn Autotransport, provides Ford with five transport vessels to move its cars on the Rhine from Cologne, each with a loading capacity of approximately 500 units. The carmaker told Automotive Logistics last week that to compensate for the reduction of units loaded per vessel it was increasing the frequency of sailings but it has since had to cut shipments.

In northern Italy, where Pininfarina and Ferrari have factories, the river Po is also at a low level and the problem continues across Europe. The Danube is running dry as it crosses Romania and Bulgaria, with emergency dredging set to take place so that ships carrying coal can pass to maintain power supply.

In terms of inbound shipments, tier one supplier, Thyssenkrupp, said it had a ‘low water task force’ continuously monitoring the situation on the Rhine. “We are taking various measures in the course of the current low-water situation… [but] we consider our raw material requirements currently to be secure,” said a spokesperson for the company. 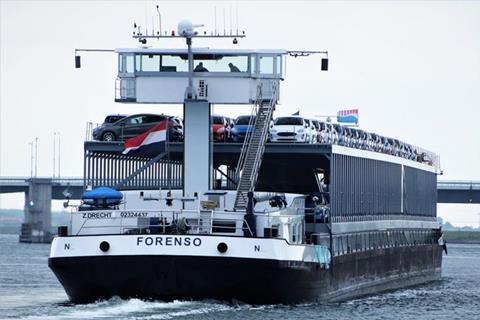 The German government has proposed dredging the Rhine, to create a deeper, single channel for barges

The picture, however, is different for freight. More than half of cross-border freight (54%) is transported by water in the Rhine-Alpine corridor and, including coastal short-sea routes, freight accounts for over a third of traffic between the North Sea-Mediterranean corridor (35%), and even more on the North Sea-Baltic corridor (38%).

To maintain that level in the face of what is likely to be more regular summer droughts and warmer winters, the German government has proposed dredging the Rhine, to create a deeper, single channel, though this project would take many years and dredging boats could be restricted in their operations during the summer because of the problem they would be trying to solve.

The restriction on the number of vehicles able to be shipped on the Rhine risks forcing more volumes onto the road network, worsening congestion and putting pressure on an already capacity-strapped sector. That goes for other industries as well.

Most critically, at present, the Rhine is being used to ship coal for power stations fired back up because of the shortage of natural gas from Russia. Coal has returned to be an essential staple for power generation, especially in France, where lower water levels in Rhone and Garonne rivers has forced EDF to limit nuclear power output from its plants because of there is not enough water to cool the reactors.