Spanish carmaker Seat is moving vehicles from its factory in Martorell to the port of Barcelona on a 25-metre megatruck provided by transport and logistics partner Setram.

The megatruck can load 11 cars per journey rather than the average eight or nine on conventional equipment. The extra capacity is projected to cut 500 routes per year, reducing operating costs by 11% and CO2 emissions by 5.2 tonnes, and improving productivity by 12%, said the company. The truck will be able to move more than 8,600 vehicles annually. 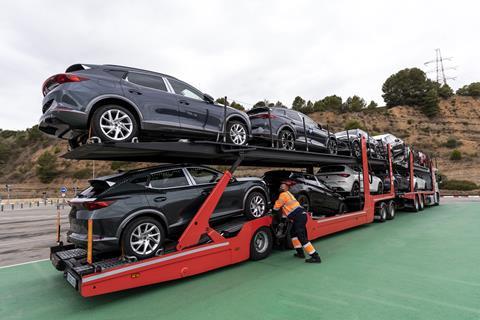 “The main advantage of the 25.25-metre vehicle carrier lies in its increased capacity,” said Miquel Tarragona, general manager of Setram. “It reduces the impact on the environment and the need for trucks… with less concentration on the road, providing a more environmentally friendly and sustainable form of vehicle transport.”

The use of the megatruck continues Seat’s efforts at making road transport more sustainable. It used a duo-trailer for the first time in 2018 in a pilot project for parts shipments into Martorell (which followed an earlier gigatrailer project in 2016). The carmaker said the use of the megatruck for finished vehicle transport reinforced its commitment to sustainability and logistics efficiency.

Seat also moves vehicles to the port of Barcelona from the Martorell plant by rail on a service provided by Autometro. Using rail eliminates the circulation of about 25,000 trucks a year on the route, according to the carmaker. The trains have double-decker articulated transport wagons with a capacity of 170 vehicles.