A Höegh Autoliners car carrier, with around 1,400 vehicles and 100 pieces of earthmoving equipment on board, grounded in the waters known as the Solent, outside the UK south-coast port of Southampton, refloated itself on January 7th and has been moved to investigate further.

A Höegh Autoliners car carrier, with around 1,400 vehicles and 100 pieces of earthmoving equipment on board, grounded in the waters known as the Solent, outside the UK south-coast port of Southampton, refloated itself on January 7th and has been moved to investigate further. 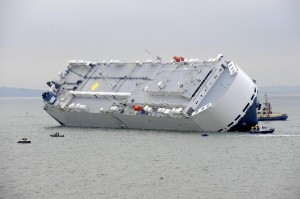 According to the company, the 51,770-gt Höegh Osaka developed a significant list shortly after leaving port on January 4th at 21:30 GMT. The pilot is then reported to have taken the decision to ground the vessel on the sandbar known as Bramble Bank to save it from sinking, and was praised for his actions.

The pilot and all crew, 25 people in total, were all evacuated from the vessel, and two were taken to hospital with minor injuries.

More than 1,200 Jaguars and Land Rovers are onboard, along with a Rolls-Royce Wraith, 65 Minis, and 105 high and heavy JCB machines. Optare has also confirmed that 10 single deck buses, destined for a customer in the Middle East are onboard. A statement from the English busmaker said, “Optare are obviously working closely with their customer to try to reduce the impact of the delayed delivery of the vehicles bound for the Middle East.”

While the vehicles are lashed down, there is still concern that damage will have occurred due to the listing of the vessel. No spillages have currently been reported, but the vessel has bunkers of around 500 tonnes of heavy fuel oil and marine diesel.

In a statement, Ingar Skiaker, CEO of Höegh Autoliners, said: “There is no oil spill reported at this point, however, we understand that the UK authorities have brought their spill response to a state of active readiness.”

The company also said it will work to prepare for safe salvage with minimal disruption to the port, and the environment.

An investigation is already underway into why the vessel began to list so badly on leaving port.

“At this stage it is too early to speculate on the cause of the list but we are starting an immediate investigation,” said Skaiker. “Right now we have serious work ahead of us in order to free the vessel from the Bramble Bank without disrupting the flow of traffic in and out of the port of Southampton. An investigation is ongoing as to what occurred last night and that is being conducted by the MAIB [The UK’s Marine Accident Investigation Branch]. Our chief concern now is to ensure there is no environmental damage from this incident.”

Experts have said that the salvage operation could take months. Höegh has appointed Svitzer as the salvors for the vessel: a team has boarded and is currently assessing the impact.

Plan to refloat
A press conference held on January 6th at 16:00 GMT revealed a possible plan to refloat the vessel as early as January 7th during high tide, but after assessing the situation overnight, it was decided that the weather was not favourable enough, and too much water had leaked into Osaka to complete the refloat so early.

The ship was to remain anchored on Bramble Bank until more favourable conditions arose, but on January 7th, the vessel refloated during high tide and was towed by two tug boats to Spitbank, which lies around two miles from Bramble Bank. The damage to the ship is now being examined, but salvors are fighting against time as strong winds are forecast.

What next?
What will happen to the vehicles onboard after they are recovered is still unknown. In 2006, the Cougar Ace, carrying

An expert in risk management told Automotive Logistics, “The Cougar Ace is an understood reference point, even before this grounding, for a lot of OEM and insurer clients, so will no doubt form part of every impacted OEM’s decision making for this incident. It was widely reported at the time, and people are aware of it and what Mazda did.

“There is no protocol in place for this,” he continued. “It’s a judgement call for the individual OEM. If the vehicles are clearly undamaged – no external damages apparent – some marine cargo policies will have a Brands Clause which allows OEMs to write them off to protect their brand. If the affected OEM has a Brands Clause, this course of action becomes more possible as that option is insured.”