Data from the China Association of Automobile Manufacturers (Caam) shows that between January to March this year total vehicle exports from China reached 582,000 units. This is an annual increase of 58.3% according to Caam, up from the 357,000 vehicles exported in the first quarter of 2021. 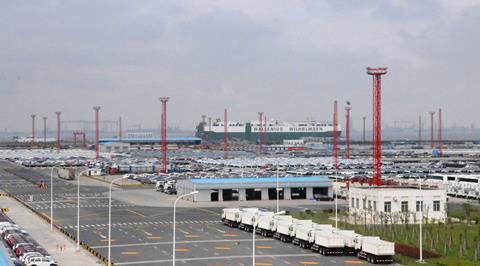 However, the impact of the ongoing Covid-19 lockdown in Shanghai has actually lowered the growth rate at China’s largest automotive port. The Chinese government is now pushing through decisive measures to fast-track vehicle exports from Shanghai.

Shanghai’s Haitong Car Terminal in the Waigaoqiao port area is the largest ro-ro terminal in China, with a dedicated yard that can park 30,000 cars. The China News Service has quoted an official of the Waigaoqiao Port Area as stating that 56 customs officers are currently stationed overnight at the port, thus allowing operations to run 24 hours a day. This follows a new round of nucleic acid screening, containment and control measures also implemented in the port area. These measures allowed vehicles to be diverted to the Shanghai Nangang Wharf within the Waigaoqiao Port Area for onward shipment.

In the first quarter of the year vehicles made by SAIC, including both the MG passenger car brand and the Maxus Datong light commercial vehicle line have been exported from Shanghai in addition to other brands.