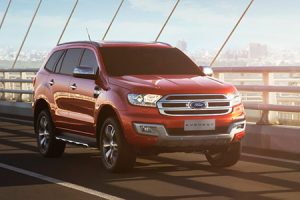 Ford has announced an investment of $170m (R2.5 billion) to expand operations at its Silverton Assembly Plant in Pretoria, South Africa. The OEM will produce the new Ford Everest SUV (pictured) and increase output of the Ford Ranger at the site.

Production of the Ranger at the Silverton plant has been running at maximum capacity, with domestic sales and exports at an all-time high, the vehicle manufacturer said.

Production of the Everest at Silverton will commence in the third quarter of 2016, with the first units expected to come to market in the fourth quarter. Eventually, the plant will be equipped to produce 10,000 Everest units annually.

South African-produced models will be sold locally and exported to markets across Sub-Saharan Africa. The AutoAlliance Thailand facility in Rayong, Ford’s Chennai plant in India, and the JMC Xiaolan plant in Nanchang, China are also production hubs for the Everest.

Until production of the Everest begins in South Africa, it will continue to be imported from Thailand and fitted with a 3.2-litre, five-cylinder Duratorq TDCi engine produced at Ford’s Struandale engine plant in Port Elizabeth, South Africa.

Jim Farley, Ford executive vice-president and president of Europe, Middle East and Africa, said: “Our customers love the capability and utility offered by the all-new Ford Everest. By producing the Everest in South Africa, we will be able to make it more readily available and in a greater variety of models for customers throughout Sub-Saharan Africa.

“The R2.5 billion investment reaffirms the importance of these markets as part of our growth strategy across the Middle East and Africa. It further reinforces South Africa’s position as a strategic export base for Ford Motor Company,” he added.

The investment in the Silverton plant is expected to create around 1,200 new jobs at Ford South Africa and within the South African supplier network.

Ford in AfricaAfrica has emerged as an increasingly important region for Ford over the past few years. The OEM announced plans to build the Ford Ranger at the Silverton plant back in 2008, with an investment of $230m (R3.4 billion), which allowed it to improve both of its South African plants. The Ford Ranger is exported to 148 countries in Africa, the Middle East and Europe while the Duratorq TDCi engines and machined components are exported to Argentina, Thailand, North America, India, and China.

In 2014, the OEM formed its newest business unit, Middle East and Africa, comprising 67 markets, to support the region and provide specific market solutions. In 2015, meanwhile, Ford announced it would assemble the Ford Ranger in Nigeria using semi knock-down kits and components from South Africa.

Last year, Ford sold 78,471 passenger cars and light commercial vehicles in South Africa, which was a record for the company. Jeff Nemeth, president and CEO of Ford Sub-Saharan Africa region, said: “As we continue to grow our business here in South Africa we are committed to improving the skills of our employees and creating new opportunities within the company and the broader supply chain.”