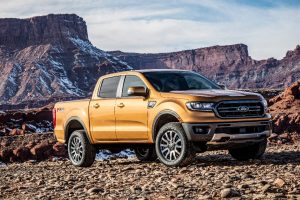 Ford has highlighted the high cost of US-made steel, in the aftermath of the 25% import duties on the metal imposed by President Donald Trump.

Speaking about the cost of key input materials at a recent event to mark the start of Ranger pick-up production at the Wayne assembly plant in Michigan, head of Ford’s global operations, Joe Hinrichs, said: “They’re certainly up year-over-year and they’re up versus what we were expecting. US steel costs are more than anywhere else in the world.”

Company officials are talking to the Trump administration about the tariffs, he added. “The government knows our position, about where we need to be in order to be competitive globally. We tell them that we need to have competitive costs in our market to be able to compete around the world,” he is quoted as saying.

Last month, Ford CEO Jim Hackett warned that higher prices for steel and aluminium, the latter of which is subject to a 10% tariff, would dent the US carmaker’s bottom line by $1 billion this year and next, despite it sourcing most of its steel and aluminium from domestic producers.

Trump’s steel and aluminium import levies have sparked a wider trade war that has included the imposition of 25% duties on imports of finished vehicles made in China. That has already led to Ford scrapping plans to export the Focus Active from China to the US market.

Should China-US tariffs stay as they are, BMW’s earnings are likely to fall by €500m ($575m) next year, CFO Nicolas Peter was quoted as saying by a German automotive magazine last week. The duties have cut exports of SUVs from the company’s Spartanburg plant in South Carolina to China, costing the OEM just below €300m in earnings, he stated. The continuing international trade conflicts have also been a factor in the Munich-based OEM lowering its financial forecasts for this year.