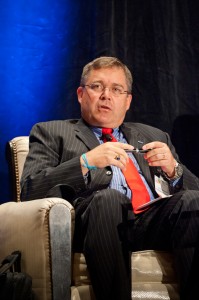 Ford will soon have a new executive director of global material planning and logistics (MP&L), and parts supply and logistics (PS&L) in North America as Grant Belanger (left) retires after 30 years with the company.

Sources at Ford have told Automotive Logistics that he will be replaced by Todd Bryant, beginning on October 1st. According to his LinkedIn profile, Bryant is currently director of global manufacturing quality.

Ford has yet to officially confirm the change or respond for further comment.

Belanger held his current role since autumn 2013, based in Dearborn, Michigan, although it was the second time he had held Ford’s MP&L, having been in the role for more than six years up to 2005. However, in his later tenure the position he oversaw an organisation that was considerably more global in scope, particularly given Ford’s substantial growth in Asia, including in China and India. The PS&L dimension of his role, which included logistics for spare parts distribution in North America, had been added during the tenure of his predecessor, Steve Harley.

Belanger joined Ford in 1985 and served in a number of purchasing leadership roles for the first 14 years of his career at the company. After working in MP&L, he occupied senior assignments in Ford’s global manufacturing business office, and in operations and quality for Ford South America, where he was responsible for manufacturing, purchasing and logistics. From 2011 to 2013, he was the deputy general manager of Ford Otosan, Ford’s joint venture with Koç Holding in Turkey from 2011 to 2013.

Speaking at last year’s Automotive Logistics Global conference in Detroit, Belanger said that the automotive sector was typified by a relentless pursuit for efficiency, while supply chains were getting longer and environmental concerns ever more present. He said it was important to work towards a uniform global logistics operation in meeting those demands.

“We have to work as much as possible on getting to a single logistics process – making the leap from today’s globalisation to true globalisation,” he said. “Common practice policies and procedures will immediately drive improvement.”

Further details on Todd Bryant will be reported shortly.

Matthias Schulz, who took over as director of MP&L for North America at Ford earlier this year, will speak at this month’s Automotive Logistics Global Conference in Detroit, held September 22-24th at the Detroit Marriot at the Renaissance Center.