FVL North America conference: To ETA, or not to ETA? 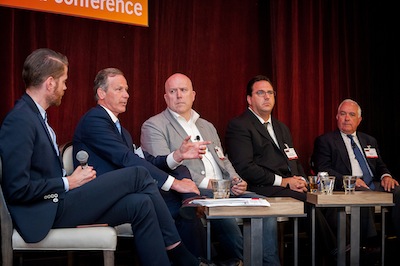 In 2015, less than 5% of new vehicles sold in North America were built-to-order, compared to around 50% in Europe, according to the National Automobile Dealers Association (NADA). Given that the majority of vehicles are built-to-stock the need to give dealers estimated arrival times (ETAs) in North America appears less important than it does in Europe. Yet delays in receiving a new vehicle can be very frustrating, especially to a customer who has spent tens of thousands on a new car.

At the 2016 Finished Vehicle Logistics North America conference in Newport Beach, executives from Fiat Chrysler Automobiles (FCA), General Motors (GM), Subaru and Glovis America revealed that reliance on ETAs was not consistent across the market.

On the one hand Subaru has made good use of them. Gerry Lee, vice-president, vehicle planning and logistics, Subaru, said that the OEM measures itself against ETAs. “We've managed to reduce dwell time by changing the way we schedule,” he said. Lee said that since 'cash for clunkers' in 2009, Subaru has been short on inventory, and demand now exceeds supply by around 10-20%, adding a lot of pressure on the logistics side. “Every dealer is convinced all cars arrive at the end of the month, even though [deliveries are] smooth,” he said.

On the other hand, GM’s Bryan Burkhardt, director of global logistics operations, said the carmaker does not provide any ETAs to dealers, and moreover, that there is no pressure to do so. Around 95% of GM's North American production is going to stock, so if the system in place remains constant, and the network runs smoothly, dealers know when they will get vehicles.

It is when things do not run smoothly that there are issues. “If you're on quality hold, that's when there's a need for an ETA... you don't know when it will be repaired,” said Burkhardt. “We are looking into that internally and want to provide an ETA. We've got an experiment going on in Europe, where there is more built-to-order. We have the capability, but we just don't [currently provide an ETA],” Burkhardt said.

FCA, meanwhile, used to provide ETAs based on transit standards, but Marc Brazeau, director of outbound and Mexico logistics, said there was a lot of bad information on vehicles that were fast selling. Since then, Rubicon VLS, a division of ICL Systems which solely manages FCA's North American network as a third party logistics provider, has implemented systemised ETAs. The accuracy rate is 82-83%, according to feedback from dealers. Brazeau said there had not been any pressure internally over ETAs, and generally, dealers were happy knowing within a window of four days when they should expect their vehicles.

Glovis America has a system that generates an ETA, but Glenn Clift, CEO, said that he did not know how much it was used by dealers. “We have not been told by a dealer than an ETA is helpful or unhelpful,” he said.

Instead of ETAs, Glovis has had more luck with delivery appointments. A dealer can make a delivery appointment ahead of time for a vehicle shipment. “We are selling out of inventory, and I think [ETAs] are less important to the end consumer,” Clift said.