Geely reaches out for help in a global future

Geely’s global exports and presence had been small outside China before the Volvo purchase, but it has plans to grow significantly in emerging markets around the world. Namrita Chow caught up with the woman in charge of international operations, Jenny Jin, at the recent CFLP Conference in Nanjing

Geely Automobile is China’s largest private carmaker, but it is very a young company in the scope of the automotive industry. Its parent, Zhejiang Geely Holding Group, came into existence in 1986, and started producing cars only in 1997. While it is known in China for its brand of affordable cars, few around the world will have necessarily driven one. This year, according to Jenny Jin, vice president of Geely International Corporation, the company expects to export around 22,000 finished vehicles and CKD kits–most of them to North Africa, South America, Russia and the Ukraine. In China, by contrast, during the first ten months of this year, Geely sales have increased 29% to 350,000 vehicles compared to 2009, according to Jenny Gu, senior analyst at JD Power Consulting Shanghai. A sales target of 400,000 vehicles in China is likely to be surpassed for 2010. 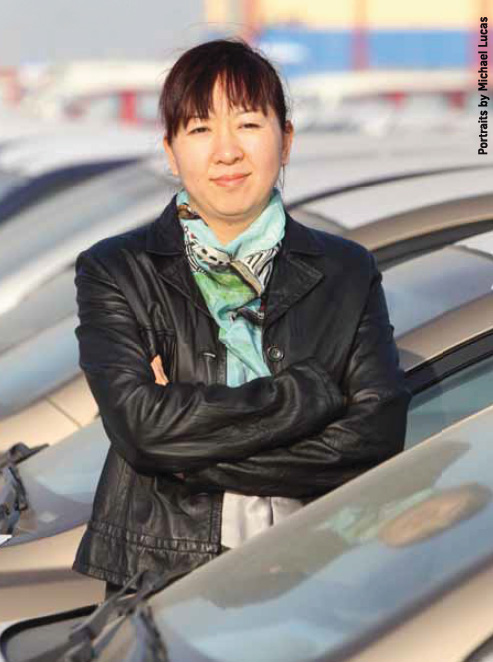 But despite its relatively small international presence thus far, Geely gained worldwide recognition in the automotive world in 2010 when its parent company purchased Sweden’s Volvo Cars from the Ford Motor Company for $1.8 billion. Geely quickly announced plans to build two plants and expand another in China for the carmaker to meet rising demand in what is now the world’s largest market for new vehicles. Meanwhile, the company has said that existing factories in Sweden and Belgium will continue to serve Volvo’s traditional markets in Europe and North America.

While sitting in the same automotive group as Volvo should help Geely’s international growth by way of brand recognition and technology, for the time being the plans for Volvo are centred almost entirely on expansion in the Chinese market. Geely, on the other hand, has global ambitions quite separate from that of the Swedish carmaker. While Jenny Jin, responsible for international operations, will not comment on Volvo, she says that the carmaker wants to have more than 15 global Geely plants overseas by 2015 (including assembly and knockdown kit operations, and not including Volvo factories) with a total annual production of 2m units. To achieve this, the company wants to develop relationships with the most professional and competitive logistics companies, whether for global shipping lines or for providers that can provide it with a full solution for complete knockdown kit (CKD) exports.

Revising expectations
Such growth overseas would be a remarkable achievement, especially given that spectacular growth at home, combined with the slowdown in major new car markets, has perhaps taken the emphasis off exports for Chinese carmakers for the moment. Geely’s highest export year was in 2008, nearly double current levels at 40,000 vehicles and kits.

Chinese carmakers have in general targeted their exports towards countries China counts in its major sphere of influence, including developing markets in Asia, Africa, South America and Eastern Europe, as well as communist or former communist countries. According to JD Power figures (which include knock-down kits), top destinations for Chinese cars in 2010 include Algeria, Vietnam, Egypt, Syria, and Iran. After exports suffered a drop of close to 45% in 2009, to 370,000 units (from 685,000 in 2008), the first nine months of 2010 saw exports recover nearly 63%, to 405,000 units, according to JD Power Consulting Shanghai’s Jenny Gu. However, with sales knocked back significantly in Europe and North America, projections for any large-scale exports to those markets appear a long way off.

Geely’s overseas markets are similar to its Chinese peers. It’s largest export market this year will be the Ukraine, projected at 4,000 units. Other key export markets are Syria, Egypt, Algeria, South Africa, Nigeria, Morocco, Indonesia, Chile, Peru and Columbia. Cuba, a stronghold for Russian Ladas since the day of the Soviet Union, has also seen Geely increasing market share since it started sending vehicles to Cuba in 2007. It now exports around 2,000-3,000 vehicles each year to the island nation, according to Jin. Potential is also seen in Russia and Indonesia, where recent CKD operations began. Whilst Geely exports have yet to enter developed markets, growth in emerging markets such as those above, which often suffer from insufficient port infrastructure and logistics service links, makes speed and efficiency even more imperative, according to Jin. 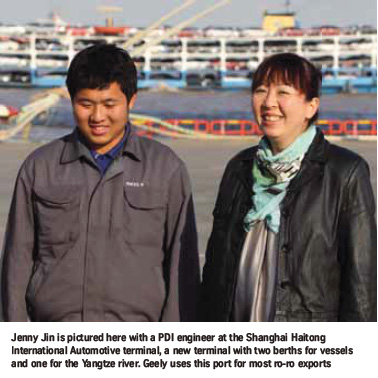 involving any third-party agent were dropped and Geely now deals directly with shipping lines. Secondly, a bidding process was introduced for shipping lines to bid for Geely business. Thirdly, special teams with specific tasks are now in play to streamline the logistics supply chain.

Background and career
Jenny Jin received an MA in advertising and marketing at Leeds Business School, part of Leeds University in the UK. “I enjoyed the multi-cultural community [at Leeds University],” she says. “Such experiences open the mind and bring about more understanding.”

This international perspective has been important for her business life with Geely, she feels, and has helped Jin in her relations with distributors from Syria to the Ukraine, Columbia or Cuba. She returned to China in 2002 and joined Geely, running the international sales department (from 2003), before adding plant and logistics responsibilities as vice president in 2008. Before Jin, Geely had no international sales, as its young production line did not export vehicles.

When Jin became vice president in 2008, her role was strengthened to include the management of Geely’s plant openings overseas and streamlining the entire logistics system for exports, including semi- and complete-knockdown kits (SKD and CKD). She coordinates with plants across China to make sure all finished vehicles reach the ports for shipments as well as making sure that all knockdown kits are correctly packaged and sent to Geely plants overseas. It is a role that is set to become considerably more challenging and high profile as exports grow. With Geely aiming to have cars on every road on the planet, Jin has her work cut out for her.

Exporting cars and kits
Geely is headquartered in Hangzhou, the capital city of China’s Zhejiang Province. Geely’s eight plants, however, are dotted around the country, with an annual production capacity for some 600,000 cars, engines and gearboxes (see map below). Outside China, Geely has CKD plants in Russia and Indonesia, and SKD plants in Sri Lanka, Iraq and the Ukraine. For parts sent as complete known down kits, container shipping is always used, says Jin. “For CKD it means we put all the parts in containers according to the packing units,” she says.

For SKD, on the other hand, some vehicles are moved more like finished vehicles, while others are closer to CKDs, Jin says. “Sometimes we need to use ro-ro vessels if the chassis is fitted with wheels,” she says. “For example, for Geely shipments

to Iraq, the vehicle models still have the chassis fitted with wheels, so a ro-ro ship would be used.” Choosing which ports to use depends on those closest to Geely plants and those which have the appropriate facilities, according to Jin. Most Geely exports are from the ports at Ningbo and Shanghai. 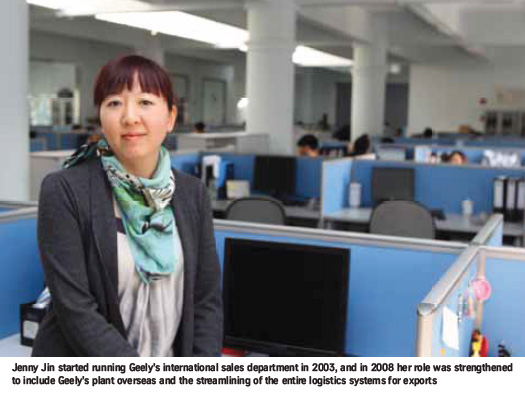 “Ningbo Port is very close to many of our exporting factories,” says Jin. Plants such as the Luqiao plant, the Linhai plant and the Beilun Ningbo plant are all served by Ningbo Port. These are mainly kit exports but Geely has built up a part of the port facility to accommodate ro-ro vessels as well, exports of which will begin soon to Syria and Egypt. “It’s a totally new facility and its allowed to be called at by ro-ro vessels,” says Jin. The models that are most often exported include the CK and EC7 made at the Ningbo plant; the MK model, which includes a sedan, hatchback and crossover made at the Luqiao plant; and the LC Panda car and the Panda crossover made at the Linhai plant.

Building better relationships at sea
One of the first things Jenny Jin did when she took over as vice president in 2008 was to get rid of what she calls the “middle man” for ocean transport–the third-party logistics provider. This simplification has reduced inefficiencies, increased transparency and made the process more straightforward, she says. “Sometimes in the logistics field we say it is not always clear water,” says Jin, explaining that the easiest way to eliminate the cause of confusion was getting rid of the agent. “We don’t use any third-party logistics provider but deal directly with the shipping lines,” she says.

By reducing dependency on a third-party-logistics provider and bringing the work in-house, Jin says she is saving money. But she has also discovered another benefit that has come as a result of China’s growing prominence in the automotive sector, as shipping lines seek to build closer ties with Chinese carmakers. Jin believes that this desire means the shipping lines behave differently than agents. For example, the end of the year is a tough time for vehicle and automotive parts logistics as everyone scrambles to find space in ships. But by working directly with the shipping lines, Jin says it is easier to negotiate space. “A lot of shipping lines are looking for long-term relations with Geely, so there is a lot of benefit to working directly with them,” she says.

Jin admits that this relationship building should not be a one-sided effort. As Geely seeks to grow on the international stage, its partnership in the outbound supply chain will play an important role. “It is also important for us to have this relationship with the shipping lines,” she says. “Logistics is important in the car business–no one can deny that.”

Shipping contracts
At the end of 2009 Jin set up a bidding process whereby shipping lines could bid for Geely’s international business. The tender allowed lines to compete openly and fairly, according to Jin. Among the more recent relationships to emerge from the result of the new process has been with Japan’s Kawasaki Kisen Kaisha, known in the industry as ‘K’ Line, which will begin calling at the new ro-ro facility that Geely has built up at the port of Ningbo for Geely vehicles bound for Egypt and Syria. 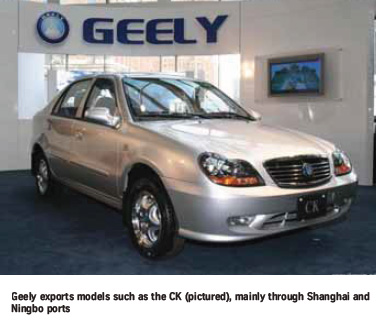 Streamlining management
Jin’s most recent structural adjustment to Geely’s international export operations has been to reorganise how the team functions, including introducing a streamlined system where every person has a very specific job description.

This means there are more exacting policies to follow, she says. “I think this makes the correspondence easier and more direct when every person has a system to follow,” she says. The system includes two fundamental sub-teams:

The CKD Operations Team (COT) is a customer facing team that works directly with distributors that place orders for Geely cars. Once an order is received the team is in charge of making sure all deliveries take place efficiently. The COT team pass on the delivery order to an internal team which they then manage, which is called the Order Operations Team, or the OOT. This team is now responsible for managing the internal processes to get the vehicles ready for export.

The goal of Jin’s realignment and management changes is to make Geely a more efficient organisation, and prepare it for the challenges of working in a truly global environment. She wants the right partners and logistics services, coordinated effectively and at the best price relative to quality. In other words, she wants to build a sustainable and world-class outbound supply chain.

And that includes avoiding corruption or back-door deals when it comes to building business relationships with supply chain partners. Jin wants everything in her tender processes and network development to be transparent and fair. “There are no favourites in this business for Geely, just the ones who bid more strategically than others,” she says.