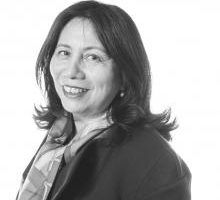 Lambusson has experience in both the automotive and rail sectors. In 1988, her automotive career started as a consultant for FASA-Renault in Spain. She then joined the Europe Allied Signal Automotive group as lean manufacturing director, Europe, before becoming factory director in Italy, and transport and logistics director, Europe.

She also worked at Alstom Transport for more than eight years as industrial vice-president in charge of the rolling stock division; general manager of the emerging units (China and Brazil); and director of business equipment product line for high speed trains, after Fiat Ferroviara was taken over by Alstom Transport. Later in her career, she moved to supplier Valeo as group programmes and projects director, responsible for launching new products for OEMs.

Lambusson said, “I am very pleased to be joining the Gefco Group at a key moment of its development. I do believe its ability to manage complex supply chains and to innovate in 4PL, as well as its operational excellence and global network, are all recognised assets that make it the preferred logistics partner for manufacturers. I want to actively contribute to strengthening the partnership between the PSA Group and Gefco.”

Fréret first started working at Gefco in 1996 as an international lawyer for PSA. In 1998, he became assistant director of the general cargo division, before becoming transport and logistics director in Avignon in 2000.

Between 2001 and 2006, Fréret worked for PwC as a manager of transaction services and at Logistic Packaging Return (LPR) as European asset director, before moving back to Gefco.

He has since held positions as business unit director of warehouse and reusable packaging services and managing director of Gefco Brazil, and was appointed customer director for the PSA contract, as well as being named a member of Gefco’s general management committee, in 2010.