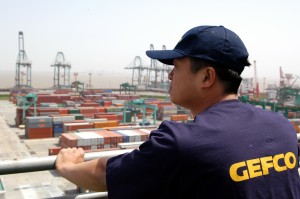 Since Russian Railways (RZD) took majority control of Gefco in 2012, the companies have been targeting trade between Europe and China, including across the Trans-Siberian Railway, with Gefco expected to use its global network of customers to drive traffic across RZD’s infrastructure. Over the past year, Gefco has run a number of trials for automotive cargo along various parts of the route, including the movement of finished vehicles in containers.

During a joint press conference with RZD in St Petersburg, Luc Nadal, chairman of the managing board of Gefco, cited examples of rail trials, such as the transport of supplies of aluminium between Hungary and several customers in China via railways. Nadal said that overall order-to-delivery time of 60 days was faster compared to ocean transport, saving costs for both European and Chinese customers.

Along with automotive parts, Gefco has run trial shipments of vehicles moving by rail in containers. Last year Gefco moved vehicles this way between Germany and several ports in China, including to Shanghai and Changchun, said Nadal. In August last year, Gefco also transported finished vehicles from Germany to China via the Xinjiang-Chongqing rail route to China’s interior.

A number of other providers, including DB Schenker, have also been moving automotive cargo between Europe to China.

Nadal said that as a result of the trials, which took as little as 25 days in transit time, several European luxury car manufacturers have expressed interest in using the container service as part of their export trades. While the volumes may be small, he said there was potential to increase the proportion moving rail on some trades.

Last year, Gefco began offering a range of intermodal rail connections between China, Russia, Central Asia and Europe. For example, it moves by rail through Kazakhstan via Alashankou, on China’s far western border, and through Russia via Manzhouli in the north.

According to Nadal and RZD president Vladimir Yakunin, Gefco will improve and expand its rail offerings for finished vehicles and automotive cargo through a wider cooperation with the assets of intermodal provider TransContainer, which is part of the Joint Transport and Logistic Company (JTLC, a joint venture between RZD and its Belarusian and Kazakhstan partners). Currently, TransContainer is the largest intermodal container provider in Russia and CIS countries.

Gefco has already worked with TransContainer to supply automotive parts from Vesoul, France for knockdown kits to the PSA plant in Kaluga, south of Moscow, for a contract set to run 2011-2015. However, this service was confirmed to have switched to road in August last year following the drop in PSA output in Russia to around 40 cars per day.

Nevertheless, Nadal and Yakunin expressed expectations that the supply of automotive cargo from Europe to China would boost cooperation between Gefco and JTLC, and especially with TransContainer.

“JTLC will be focused only on the Trans-Eurasian supply, while GEFCO obviously is a more global company, and so they will cooperate for cargo moving between Europe and Asia,” he said.

Nadal and Yakunin also revealed that, despite the problems in the Russian market, Gefco is expected to remain profitable this year and to return a dividend of around RUB 5 billion ($73m) to RZD.