GM begins work on supplier and logistics park in Arlington 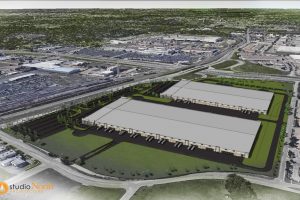 [Updated June 22nd] GM will open a new supplier park and logistics centre next to its assembly plant in Arlington, Texas in 2018 as part of its $1 billion investment in US operations announced earlier this year. Arlington City Council has approved economic incentives to facilitate a $250m redevelopment project that will transform the former Six Flags Mall site into a GM parts supplier hub.

The carmaker said the Arlington Automotive Logistics Center, which will include two “industrial manufacturing and warehouse buildings” across an 11-hectare footprint, will support future vehicle production. The company marked the beginning of work on the site with a groundbreaking ceremony this week.

Currently the Arlington plant makes around 1,200 vehicles a day including the Chevrolet Suburban and Tahoe, the GMC Yukon and Yukon XL and the Cadillac Escalade and Escalade ESV.

That logistics efficiency is based on a strategy of reshoring suppliers to the area around the plant to ensure more just-in-time delivery of components and to reduce the risk of shipping disruption.

“We are reshoring suppliers closer to Arlington for some components that are more difficult to ship or susceptible to customer variation, such as interiors,” said a spokesperson for GM. “They tend to be big, bulky components, so they are more difficult or expensive to ship and the colour and trim mix tends to have more fluctuation based on customer preference.”

The spokesperson added that GM was consolidating logistics operations around the Arlington area into one logistics centre to improve optimisation of material into the plant.

The carmaker also said that the centre would bring more than 850 new jobs to the area as part of an overall workforce of 1,250. It also indicated that 600 of those jobs would replace parts-related work previously done in Mexico in the office and managerial part of the business. The suppliers for the parts in the next generation SUVs will be located in Arlington according to a spokesperson for GM.

The number of parts moved lineside at Arlington on a daily basis are enough to meet a vehicle build of 1,245 units.

Tier supplier, International Automotive Components (IAC), has confirmed it will be one of the companies to start operations at the logistics centre once it is complete.

“We are excited to establish this new Arlington location as one of our flagship manufacturing operations among IAC’s 22 other US plants,” said Steve Miller, president and CEO of IAC. “IAC’s role as a supplier of vehicle interiors to GM extends back almost a century and this impressive new centre marks a great beginning to our next century in partnership with this customer.”

The supplier park and logistics centre at Arlington is being built by Bob Moore Construction.