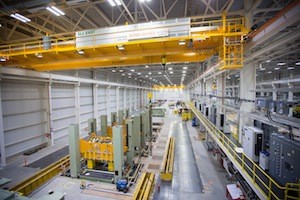 To meet the forecasted market demand for the Chevrolet Camaro, GM is adding a third shift and more than 500 hourly and salaried jobs at its Lansing Grand River Assembly plant in Michigan.

Once hiring is completed, the addition of a third shift will increase the plant’s employee number to around 2,300. Hiring is currently underway, and the shift is expected to begin from the second quarter.

Lansing regional plant manager, Mike Trevorrow said, “This is the result of the award-winning vehicles Lansing Grand River produces and the confidence GM has in our team to build world-class quality for our customers.”

Mike Green, UAW Local 652 president added, “This is an exciting time at Lansing Grand River. We just added the Chevrolet Camaro to our vehicle line up and now we get to expand the UAW-GM family, which will bring the plant to full capacity. What a great way to start the new year.”

GM started shipping the Camaro from the plant in October 2015, and models hit the dealerships in mid-November. It is the first time the vehicle has been made in the US since 1992.

Over the past few years, GM has invested around $670m in the Lansing facility. That investment includes a $44.5m logistics facility. The 37,000 sq.m Logistics Optimization Center, adjacent to the plant, began operations in the first quarter of last year.

Towards the end of 2015, the Lansing Grand River Assembly plant received the first delivery of stamping press equipment, which will be used to stamp parts for the Camaro, Cadillac ATS and CTS ranges, which are all produced on the same line.