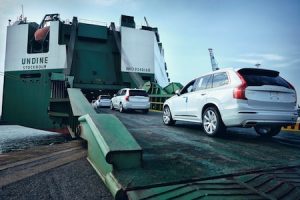 Finished vehicle numbers at the Swedish port of Gothenburg rose by 24% in the first nine months of this year, to 176,548 units. In the most recent quarter (July-September), growth was 15%, with 56,000 cars passing through the port.

“Volvo is selling more cars than ever before and the shipping of vehicles to almost every market takes place from here,” said port authority chief executive, Magnus Kårestedt. “The last year has also seen an increase in imports of cars, which is extremely pleasing.”

Claes Sundmark, vice-president, container, ro-ro and rail, said that of the total number of units being handled, 61% were exports, compared to 59% in the first three quarters of last year.

Gothenburg remains the largest vehicle export outlet in Sweden, with all outbound cars being generated by Volvo. Significant brands such as Mazda, Nissan and Renault are among the imports.

Sundmark estimated that for the whole of 2016, Gothenburg would handle around 240,000 units, and said the port had enough capacity.

“Gothenburg is a true logistics hub for Sweden and Scandinavia,” he said. “From here, imports can efficiently be distributed to the markets. High quality and experienced handling operations as well as PDI [pre-delivery inspection] operations also favour increased imports. Import cars help balance the car carriers’ utilisation. Combined with high frequency ro-ro ships, import cars can easily be distributed from ports such as Zeebrugge to the customer via the port of Gothenburg.”

“The amount of shipping lines calling here is growing, with SOL and EML being relatively new customers to the port; none have so far left,” said Sundmark.

Trans-shipment, however, remains elusive, with just a few units rotated in and out by sea.