GPC completes trio of acquisitions with Covs Parts in Australia 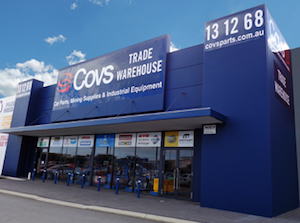 Covs Parts, which distributes commercial equipment and aftermarket automotive parts in the western part of Australia, has been taken over by GPC’s Melbourne-based division, GPC Asia Pacific. The buyout includes 21 Covs Parts branches and is expected to add annual revenues worth $70m.

Four Covs Parts outlets – in Albany, Esperance, Karratha and Port Hedland – are being retained by AHG’s Amcap division (which also deals in automotive parts) and rebranded as Skipper Transport Parts, following objections to the sale by the Australian Competition and Consumer Commission (ACCC). The governmental body’s concerns centred around the effects of the original deal, which involved all 25 Covs stores, on competition in some regions.

AHG originally acquired Covs Parts from Coventry Group in 2011. The company restructured the business and has retained the exclusive distribution of Ford and Holden parts in western Australia within its Amcap division.

GPC also distributes industrial replacement parts in the US, Canada and Mexico and its Motion Industries division, based in Birmingham, Alabama, has also completed the acquisitions of US industrial equipment providers Epperson and Missouri Power Transmission. Combined, these two companies are expected to generate approximately $50m in annual revenues.

“These strategic investments represent our ongoing commitment to accretive growth through targeted acquisitions,” said Tom Gallagher, chairman and CEO of GPS. “Covs Parts, Epperson and Company and Missouri Power Transmission are quality organisations and are complementary to our existing businesses. We expect all three teams to further enhance our future growth and are pleased to welcome them to the GPC family."