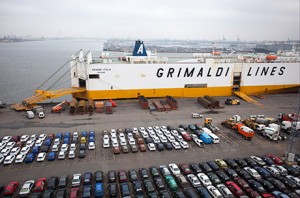 Grimaldi Group has reaffirmed a commitment to build a vertical storage facility at its Valencia Terminal Europa, on Dique del Este, at the Mediterranean port of Valencia.

Mario Massarotti, MD of the group’s Spanish operation, said the new facility was required to improve the quality of service it offered in the port, based on increased imports of finished vehicles by Fiat and exports by Ford.

In 2015, Fiat imported more than 100,000 units through the port for the first time, compared to just 66,000 units the previous year. Space restrictions in 2015 resulted in many Ford units having to be exported via Sagunto, meanwhile.

Grimaldi operates a 200,000 sq.m site in Valencia which handles both finished vehicles and other goods.

The firm already operates its own terminal in Barcelona, which was opened in July 2013 and is claimed to be one of the most modern and efficient in the Mediterranean.

“For the moment, the group has no other plans to invest in more terminals in [Spain],” said Massarotti.

Massarotti went on to say that although 2016 had been something of a year of consolidation for the company, the finished vehicle export business had registered a major increase this year. By contrast, the semi-trailer ro-ro sector had produced little in the way of change, he said.

He also revealed the Grimaldi Group had recently put into operation a new vessel, the Atlantic Sea, which is its third G4 fourth generation ro-ro ship and belongs to group member Atlantic Container Line (ATL). In addition to 3,800 containers, it has a further 28,900 sq.m of space for trucks and up to 1,300 vehicles. ACL operates routes between Europe and North America.

Grimaldi also recently introduced the Eurocargo Salerno in Spain, which operates the Barcelona-Savona route. The company currently operates services to and from the ports of Barcelona, Bilbao, El Ferrol, Santander, Valencia and Vigo.