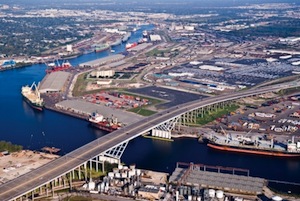 Italian shipping line, Grimaldi, has launched the first direct container/ro-ro service between the US port of Houston and West Africa, taking in a total of 15 ports.

The company will deploy a fleet of six multipurpose vessels on the route and there will be a call every 11 days at the Barbours Cut Terminal at the Texan port, according to the port authority.

The vessels will be capable of carrying containers, as well as vehicles and other rolling stock.

The port of Houston is the largest container port in the US Gulf of Mexico, handling about two-thirds of all containers that move through the gulf. In 2015, the Port Authority handled more than 2m TEUs for the first time in its history.

In addition, it handled around 130,000 light vehicles, all of which were imported.

“Grimaldi is pleased to announce the added port call to Houston on its successful East Coast West African service,” the company said in a statement. “The Gulf region is an important market in the growing trade from the United States to West Africa. We are excited to be able to offer manufacturers, traders and the oil and gas sector the facility of a regular direct container service from Houston to a wide range of ports on the West African coast.”

Last year Grimaldi invested $300m in five car carriers to provide direct services between Europe and the US, including the Italian port of Civitavecchia and the ports of Baltimore and Halifax in the US, to transport cars and other ro-ro cargo.