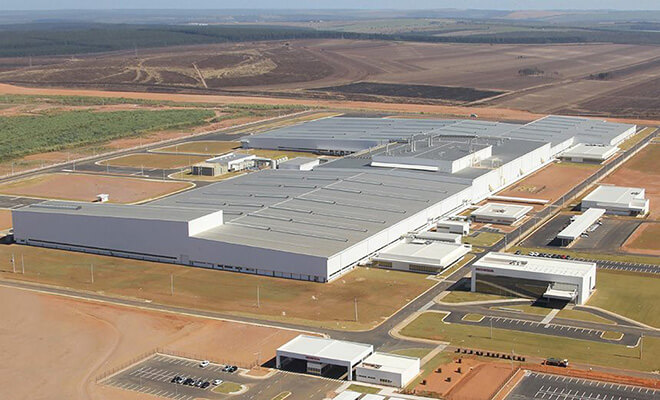 Japanese carmaker Honda has begun operations at its Itirapina assembly plant, in the Brazilian state of São Paulo.

Production is starting with the Fit model but over the next three years, the company will transfer production of other models from its Brazilian plant in Sumare, which makes the Civic, City, HR-V and WR-V, as well as the Fit. The Sumare plant will then concentrate on powertrain production.

The switch, which involves a development cost of around 1 billion reais ($266m), will make production more efficient with a reduced environmental footprint, said Honda.

Honda, which has been making cars in Brazil for more than 20 years, said the new plant featured an assembly line with new painting technologies, various automated equipment and new welding and stamping technologies that enabled shorter processes.

The economic slowdown in Brazil that started in 2013 saw car production there drop from 3.6m units to 2.1m by 2016, but the county is now showing signs of recovery. Production recovered to around 2.8m units last year and passenger car sales grew by 12%.

Honda announced the shake-up in its Brazilian operations in April last year. At the time, the company said: “The automobile business environment in Brazil has undergone significant changes in recent years. The market is now showing signs of gradual recovery.”

At 580 hectares, Itirapina is more than three times the size of Sumare but it will have the same production capacity of 120,000 units/year and a workforce of around 2,000 when restructuring is complete – down by around 1,200 staff.

Honda said it recognised the need to strengthen its business structure based on the present market and make a shift towards a more sustainable business.

Last month, Honda announced a restructuring of its global manufacturing network to accelerate its commitment to electrified cars “in response to the unprecedented changes in the global automotive industry” and focus activity in regions where it expected to have high production volumes.

As a consequence, the company plans to close its Swindon plant in the UK in 2021, at the end of the current production lifecycle of the Civic hatchback and type R models, as well as winding down operations in Turkey, ending production of the Civic sedan in 2021. But the company intends to continue business operations in Turkey and said it would hold talks with stakeholders over the next three years.