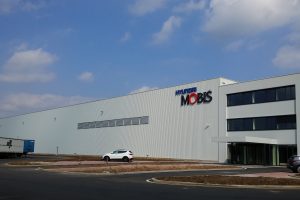 The 56,000-sq.m centre in Beringen will serve as a hub for six regional distribution centres across Europe – in the UK, Germany, Spain, Italy, Sweden and Hungary. It will also ship parts directly to service centres in Belgium, France, the Netherlands, Switzerland and Ireland.

The company said the centre would cut logistics and inventory costs as well as shorten lead time from order to delivery by more than two days.

Hyundai-Kia has 92 distributors and 5,742 dealers throughout Europe. Prior to the opening of the facility, Hyundai Mobis was flying parts in three times a week to each of the six distribution centres from its base in South Korea. It will renew stock at the new centre from South Korea with between two and three ocean shipments per week.

In a statement, the company said it was striving to improve its logistics system in Europe with pre-emptive investments in order to supply genuine parts to drivers as quickly as possible.

The number of Hyundai and Kia vehicles sold in Europe is continuing to rise. In the first six months of 2016, Hyundai recorded almost 261,600 registrations according to figures from the European Automobile Manufacturers Association (ACEA). That was a 10.2% increase compared to 2015 and ahead of the overall market trend. Kia, meanwhile, recorded almost 229,600 registrations in Europe over the same period. The carmaker said it was its best-ever six-month period and a 14.8% uplift on the same period last year.

In other news, Hyundai Mobis has marked its tenth year of supplying chassis modules for Chrysler in North America. Through its Mobis North America division, the company expects to deliver 4m modules by the end of this year. Mobis North America makes the modules at its Ohio and Michigan plants. The Ohio plant has an annual capacity of 246,000 modules and produces the complete chassis module for Chrysler’s Jeep Wrangler. The Michigan plant supplies the front and rear chassis for Jeep Grand Cherokee and Dodge Durango, with an annual production capacity of 360,000 modules.