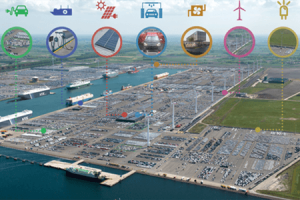 NYK’s car terminal subsidiary, International Car Operators (ICO), has signed a concession agreement with the Belgian port of Zeebrugge for a 54-hectare expansion of the Bastenaken car terminal.

According to ICO, the new terminal will cover 200 hectares, bringing the total at Zeebrugge to 300 hectares, and will connect Bastenaken with the Hanze terminal, thereby enabling traffic arriving at the terminal to enter via a single, newly constructed gate building located adjacent to the A11 motorway.

The latest move builds on a 30-hectare expansion that ICO completed last year at Zeebrugge as volumes increase. The port handled a total of 2.8m vehicles last year and ICO (one of three car terminal operators at the port) said it expected the Nordic market to develop strongly over the next three to five years. Zeebrugge is the biggest car handling port in Europe.

ICO was keen to push the environmental credentials of the most recent expansion, which will use solar panels and LED lighting and will also incorporate 12 wind turbines next year.

“Whilst supplying clean electricity to the local community, power will be used to supply a considerable number of electrical loading stations, in light of the increase in private electric car sales,” said the company in a statement.

“Our goal is to offer power (cold ironing) to all vessels berthing at the ICO terminals, enabling ships to shut down their engines completely during port operations,” said ICO.