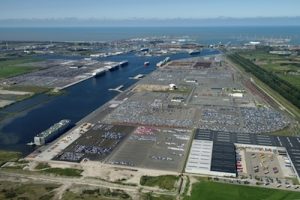 NYK’s stevedoring subsidiary International Car Operators (ICO) is expanding ro-ro terminal capacity at the Belgian port of Zeebrugge, after an 11% increase in ro-ro traffic at the port in the first half of this year compared to the same period last year, to 1.38m vehicles.

ICO’s Benelux division is extending three terminals at the port. The first is at the Nissan terminal, where additional paving will be added along with drainage, utility lines and lighting. ICO started handling Nissan vehicles through Zeebrugge in February 2014 when volumes shifted from Le Havre.

Similar work is being carried out at the Bastogne and Hanze terminals. The Hanze terminal is where ICO processes Toyota volumes and is being extended to cover 27 hectares.

The port of Zeebrugge has reported growth in ro-ro traffic to all destinations recently, particularly to the UK, Ireland, Scandinavia and southern Europe.

In February this year, ICO signed a new five-year contract with car carrier UECC. ICO said that over the last 21 years, its Zeebrugge terminal had become a central hub for UECC’s services between the Mediterranean Sea, the Iberic peninsula and the Nordic area. Volumes increased from 10,000 to 650,000 units over that period.

ICO also signed a new contract with Mediterranean Car Carriers Line (MCCL) at the beginning of the year. MCCL brings assembled vehicles from Turkey and Spain to the firm’s terminal in Zeebrugge before rival operator EML trans-ships the vehicles to Scandinavia.

The first half of the year also saw a rise for Zeebrugge in the break bulk sector with a total volume of 750,000 tonnes handled – up 40% on the same period last year. Container traffic, by comparison, was down 5% at 7.7m tonnes.