India: Chasing away the railroad blues 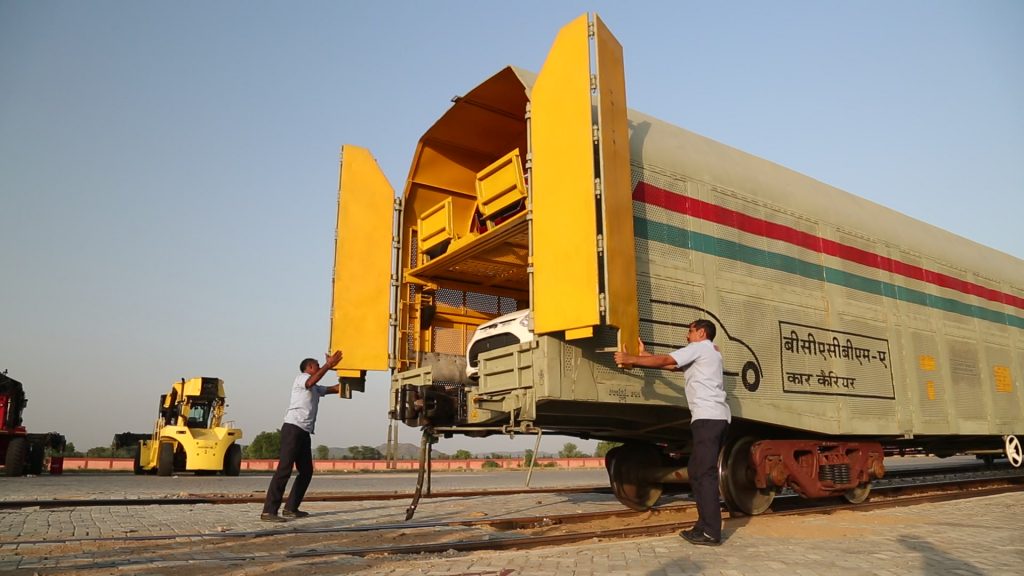 Legislation and equipment design have brought Indian railways far down the track from where they were ten years ago, but infrastructure and standards still lag behind developed regions

India’s vehicle logistics has long been dominated by truck, with production growth over the past decade putting even more strain on the country’s underdeveloped roads. Although India’s rail network is the world’s fourth largest after the US, China and Russia, it has historically been ill suited to meet the requirements of vehicle transport. However, in recent years the government and the private sector have been more involved in creating a viable alternative to truck transport. Although the rail mode is a long way from its full potential, between 3-4% of India’s finished vehicle production now moves by rail, and carmakers and logistics providers have aspirations to use it much more.

The story of rail in India over the past decade has been one of ambitious, if not halting progress. There has been considerable focus on improving freight flows on its passenger-dominated railways. In 2006, the government established the Dedicated Freight Corridor Corporation of India (DCFFIL) to oversee construction of six freight-only lines, part of a modernisation programme that included opening up some operations to private investment. Although fewer than 10% of the 25,000km of new lines initially targeted have so far been built, tracks are being laid.

For automotive rail, the biggest change has come in equipment. Previously, Indian Railways only owned and operated single-level wagons that were refurbished passenger carriages, called new modified goods (NMC) railcars. The total capacity of NMC rakes (or unit trains) is about 125-150 cars. In 2008, Indian Railways introduced the first bi-level railcar, although its use and capacity remained limited.

More changes came with the Automobile Freight Train Operator (AFTO) licence, which Indian Railways introduced in 2010 and modified in 2013. This made it possible for foreign-owned businesses to own and operate railcars for automobile transport, with licences granted to companies willing to invest in at least three rakes. Since then, two companies have taken up the scheme: Maruti Suzuki, India’s largest carmaker, and third party provider APL Logistics Vascor Automotive, a joint venture between APL Logistics and Vascor (itself owned jointly by APL and Japan’s Fujitrans).

In taking on operator status, APLL Vascor introduced a new bi-level railcar system, AutoLinx, with increased carrying capacity, security and an adjustable middle deck to accommodate different model sizes. Currently, the company offers three rakes that each have capacity for around 275 vehicles, according to Umesh Bhanot, the company’s chief operating officer.

In about a year since it started operations in August 2014, APLL Vascor moved more than 21,000 vehicles on Autolinx railcars. It currently operates two lanes: a weekly Chennai-to-Delhi service, and a route from Chennai to Guwahati, in the north-eastern state of Assam, every other week. “By January 2016, we plan to double our capacity with the addition of three rakes and make AutoLinx available to OEMs in western India,” says Bhanot.

Although APLL Vascor has not disclosed which OEMs use its services, a number have said they have carried out trials, including Honda and Ford. Venkateswaran Anand, senior general manager of sales logistics at Hyundai Motor India, the country’s second larger carmaker, says the company is a regular Autolinx customer.

Maruti Suzuki, which has been responsible for the majority of vehicle transport by rail in India, has declined to comment further on its own AFTO licence. The OEM has been reported to be ‘going its own way’ with the use of exclusive rakes – although some sources have suggested it is now changing this approach to work with more OEMs and providers.

Such progress notwithstanding, increasing rail’s share of Indian vehicle logistics will still require considerable investment, both on and off the tracks. For example, India has few rail sidings directly at car plants or distribution hubs. Companies are also awaiting further regulatory changes, not least the rollout of the much-delayed Goods and Service Tax (GST). Finally, although Indian vehicle sales have returned to mild growth this year, much will depend on the stability of the country’s volatile market. 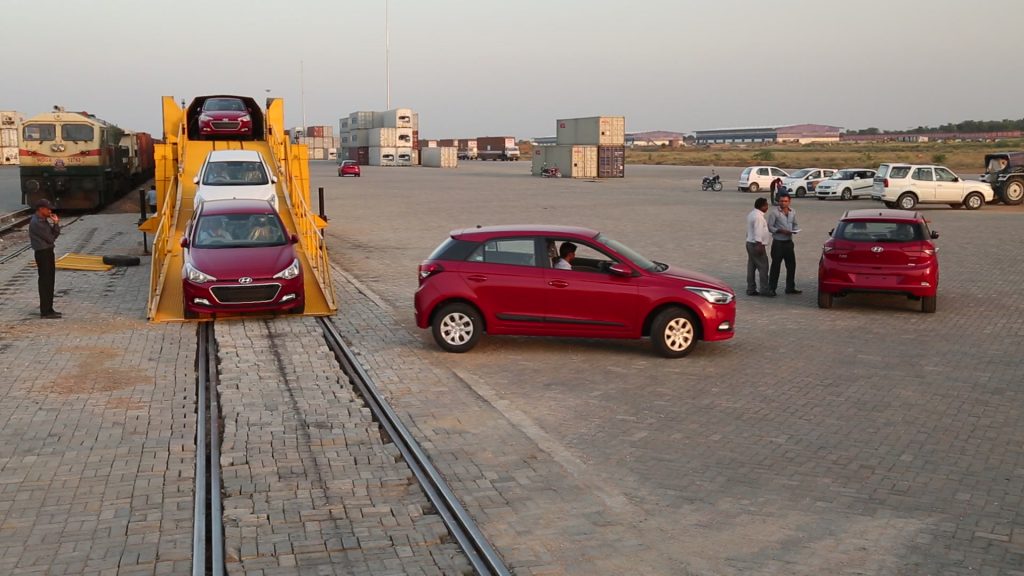 A long way to ride

Hyundai Motor’s use of Autolinx has been notable, even if it remains a small share of its overall vehicle logistics. Between August 2014 and May this year, the carmaker used the new railcars to ship 4,555 vehicles, or about 43% of its rail shipments; Gurgaon-based TCI Freight handled the others, according to Anand. Overall in 2014, Hyundai transported about 2.2% of its domestic volume by rail (9,195 vehicles); in the first half of 2015, the rail proportion was 3.2%, growing even as Hyundai’s domestic sales rose.

However, Anand makes it clear that a lot will need to change before rail plays a bigger role in Hyundai’s vehicle logistics.

Currently, the carmaker uses rail and AutoLinx for distances of at least 2,000km. That is partly because the current freight rate structure is less favourable on shorter routes, while longer distances tend to be faster by rail than truck. “Although rail does not offer any major competitive advantage over road in terms of freight savings, we have used it to serve north-east India, which saves a significant amount of transit time,” says V. Anand. “Guwahati takes six days by rail compared to 14 days by road.”

Other constraints make it difficult for rail to beat road for many routes, including the lack of availability of specialised ramps for multi-level loading of the wagons. “Plus, rail terminals that handle finished vehicles often do not have sufficient space for aggregation and truck manoeuvring,” says Anand, pointing to a lack of proper terminals in southern, western and northern clusters, where the carmaker uses truck or NMG rakes.

“We would need a minimum of ten terminals to take a quantum leap in the use of rail,” he estimates.

Such investment has been less than forthcoming in the recent economic climate. Although Indian Railways has opened up freight terminal management to private companies via its Private Freight Terminal (PFT) policy, the conditions are also less favourable than the multi-user facilities suited to vehicle transport, says Anand. While Maruti Suzuki has made its own rake investments, most carmakers prefer to use 3PLs.

“With the PFT policy, it is unlikely that companies will make any further investments in creating terminals that could handle cars,” says Anand. “This has been one of the major limiting factors, as with an extremely volatile market it would not be viable for any private player to set up an exclusive terminal. The focus was very clear that Hyundai did not want to make any capital investment in rakes and wanted a business model wherein a 3PL provider would understand this volatile business model well.”

Anand also suggests that a lack of flexibility in freight charges and operations makes it difficult to run rail in ‘milkrun’ style routes with multiple collections or drop-off points. Perhaps the most important development for such services would be the GST, which would allow OEMs to use consolidated distribution yards as hubs to serve multiple states by rail without paying a variety of state taxes as it would today. The government has set April 2016 as the date for GST implementation, but negotiations in Congress seem likely to delay it once again.

As ever, change in India is slower than executives would like. For example, Hyundai had hoped to be using double-deck wagons to the western region by now, but has pushed the project back by a year. Both the GST and dedicated freight corridors are perennial hopes that seem forever deferred.

But there is nevertheless clear progress. Umesh Bhanot points out that construction is already underway on two of the country’s six proposed freight-only rail lines, including an eastern route from Ludhiana to Kolkata, and a western one from Mumbai to Delhi. “These corridors likely will be operational before the end of the decade,” he says.

New legislation on the length of car transporters – which could come in as early as this year – would also help to make rail more competitive by comparison. A rise in exports, meanwhile, would allow more fixed flows from plants to ports.

Perhaps a measure of how far India has come can partly be found in its shortcomings. Not many years ago there would have been few options besides refitted passenger carriages or containers for rail, while today executives are clamouring for their specially designed multi-levels to come with the technology common in North America and Europe’s more developed rail services. Anand, for example, wants to see tyre lashing on all wheels for safety, automated hydraulic deck adjustment to accommodate vehicle heights, and inbuilt ramps to unload cars directly from the top deck.

Indeed, for all his hopes for improvements, Anand believes Hyundai’s use of rail transport could climb from 3% today to around 15% over the next five years. Should others in the sector follow, that would mean a jump of more than seven times in pure volume, considering projections for the country’s light vehicle assembly to surpass 6m by then. While the past decade saw legislation and equipment designs make rail viable in India, the next one could see it become a genuine force in vehicle logistics.