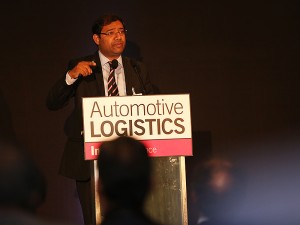 As it prepares to open its second Indian plant next month, Ford has switched its inbound logistics outsourcing in the country from the use of a third party logistics provider (3PL), which managed transport through a mix of its own assets and other carriers, to a ‘lead logistics provider’ concept with asset-light provider Penske Logistics.

The change was made to better use Ford’s increased production and supply scale, as well as to improve its logistics scheduling in relation to production changes. Ford's switch comes as other logistics providers, including DHL Supply Chain and UTi Automotive, are also pushing more for LLP services in India for inbound, in-plant and export consolidation.

Speaking at the 2014 Automotive Logistics conference in Gurgaon, Ford’s vice-president for logistics and export operations for Asia Pacific Africa, Amlan Bose (pictured), revealed that Ford had made the switch ahead of the planned launch of its new integrated factory, which is scheduled to begin production in January 2015 in Sanand, Gujarat. While Ford had used a 3PL model for its inbound logistics to its plant in Chennai since 1999, Bose explained that this approach was not “dynamic” enough to gain the potential loading and shipping efficiencies across two plants.

“We are inching towards a much higher growth over the next five years. Our previous system was very static in nature. Production changes on a daily basis, however the 3PL was not always keeping up with the changes, sometimes keeping the same delivery plan and frequency for a month,” he said.

Bose added that he felt that the 3PL, which owned some of the fleet it was using for Ford, did not take full advantage of opportunities to combine and reduce transport cost since it was using its own fleet. “There was a lack of motivation or desire to go after cost optimisation. It might have been an issue because the 3PL owned part of the fleet,” said Bose. “We wanted to go to another model.”

Ford has since brought in Penske Logistics to act as the carmaker’s LLP in India. “It made sense to use Penske because it is already an LLP expert for Ford in North America and South America,” Bose told Automotive Logistics.

Penske’s role includes designing and adjusting milkruns and planning deliveries across both plants, including making daily adjustments where necessary. “The LLP works with us 48 months in advance of a launch. It has full access to freight budget, and sits with us in the same office,” said Bose. “The only difference might be the uniform they wear.”

When the new plant in Sanand reaches its production capacity, Ford will have installed capacity for around 440,000 vehicles and engines in India. The carmaker intends to ship about half of its Indian production as exports.

According to MP, such concepts are somewhat new to India in part because they require a closer sharing of data, budgets and even forward product plans. “We need to work together over the long-term to realises the true benefits, and OEMs need to be providing information on their product plans up to three years in advance,” he said.

Other providers have also found some success in bringing the LLP model to India, including UTi Automotive on behalf of the Volkswagen plant in Pune, for which it manages inbound transport and in-plant logistics handling.

The logistics provider is also consolidating and packing parts exports for Ford from an export centre in Chennai, according to Hari Sivaprakasam, UTi’s India director. UTi manages all of the inbound collection, consolidation and export for about 70 suppliers to the centre in Chennai, where around 500 containers per month are packed for export. UTi is also running a similar facility on behalf of Ford in Thailand, which ships 900 containers per month.

“By integrating functions together with Ford and UTi, we are able to reduce cost and complexity for Ford,” Sivaprakasam said.

He added such approaches were more common outside of India, but he believed that the examples with Ford and Volkswagen showed that they would likely be taken up by other OEMs in India.

Video recordings of the main sessions at the conference are available here.