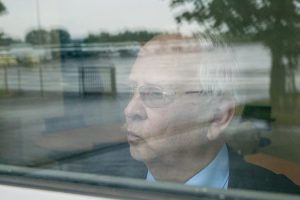 The founder remained in his position as the senior manager of the Mosolf Group until his last day.

Dr Jörg Mosolf, managing partner and chief executive manager of the Mosolf Group said, “My father was a man of extraordinary skills; he had great business foresight and far-reaching visions. His tireless efforts turned the Mosolf Group into what it is today. It was just as important for him to work on an equal footing with customers as to always have an open ear to the concerns of his employees.”

Horst Mosolf had a tough childhood. He was born in Wittstock an der Dosse (now in the state of Brandenburg) in 1928, and his early years were shaped by war and imprisonment. After his family lost everything for the third time, they fled to West Germany in 1953.

Mosolf and his wife Marianne founded a freight forwarding company for transporting vehicles and providing technical services at Kirchheim/Teck in the state of Baden-Württemberg in 1955, two years after fleeing. He was only 28 at the time.

Early in his career, Horst understood that OEMs needed storage areas and other services alongside transport operations. He began opening business sites across Europe in the early 1960s, starting near the Belgian port of Antwerp. Initially, Mosolf worked as a vehicle exporter and shipped vehicles made in Germany to overseas destinations. The expansion continued into Spain, France, Poland, the Czech Republic, and elsewhere.

Today, the Mosolf Group has 30 bases spread across Europe, and employs 2,500 people.

Last year, Daimler, a long-standing Mosolf customer celebrated Horst’s lifetime achievements as Mosolf was presented with the European Carrier Award. At the event, Mosolf said, “If you have a vision in life that you strive after, that’s enough motivation to use all your strength to make it come true.”