BMW is now using automated guided vehicles (AGVs) from EK Robotics to move steel blanks and panels around its new press facility in Swindon, UK. The parts are then delivered to the Mini assembly plant in Oxford, around 50km away.

The streamlining of the logistics process is helping to keep pace with new Schuler press equipment that has been installed at Swindon, and which is able to produce steel panels at twice the rate of the previous equipment. 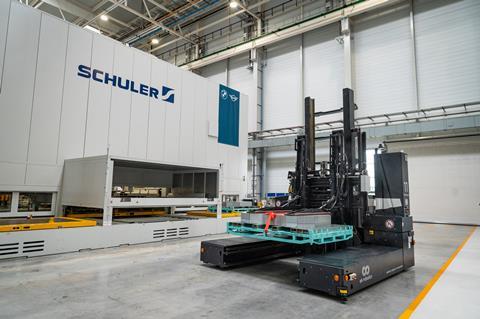 BMW said the use of the nine AGVs at the press shop, including one that can move six tonnes of material, is a technological first for the company and it is planning to introduce AGVs for steel handling across its global network of manufacturing plants. BMW is deploying another 14 AGVs supplied by Linde for its sub-assembly operations, bringing the total commissioned to 23 so far. The carmakers said it was planning to add more over the next few years.

The supply of AGVs to the press shop is part of a wider agreement that BMW has with EK Robotics, which is based in the UK. The agreement includes the supply of EK Robotics Custom Move, Vario Move and Very Narrow Aisle (VNA) AGVs. EK Robotics has also installed bespoke racking for BMW warehouse operations. According to Chris Price, managing director of EK Robotics, the largest AGV – from the Custom Move range – was delivered in parts by a special convoy and assembled on-site.

“Plant Swindon now has the latest press-shop technology and is ready to take its performance to the next level, as a vital member of BMW Group’s international production network,” said Dr Milan Nedeljković, head of production.

The new Schuler press is made up of six individual stations that can make up to 18 parts per minute. BMW also reports that the time taken to swap the pressing tools has been significantly reduced, from at least 30 mins, to a little over three minutes. EK robotics has also designed and supplied AGVs to take die tools to and from the new press.

The pressure which the new press can apply is 2,500 tonnes.

Construction of the new press facility began in 2019 and BMW has installed a number of features aimed at reducing emissions. Water is collected from the roof for industrial use, the main hall is heated by capturing output from the press hydraulics and BMW has introduced more natural light into the building, as well as using LED lighting in other areas.

“This project is a testament to the expertise and the passion of the team here in Swindon, and I couldn’t be prouder,” said Dr Markus Grüneisl, CEO of both the Swindon plant and the Mini plant in Oxford. We are now sharing the learning from all the new projects at Swindon with our colleagues from the wider production network and so showcasing these new advances at Swindon around the world.

BMW Group has also recently announced that it is researching autonomous logistics at its Landshut component plant in Germany, in conjunction with the Technical University of Munich.