Volkswagen has started series production of the ID.5 electric vehicle (EV) at its Zwickau plant in Germany, the sixth EV to be made at the plant after the ID.3, ID.4, Audi Q4 e-tron, Q4 Sportback e-tron and Cupra Born. The ID.5 also comes in a GTX version. 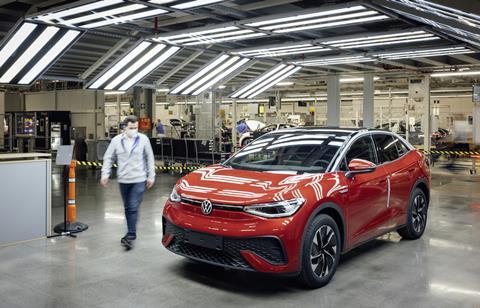 To support the growth in EV production at Zwickau, VW has added more than 50,000 sq.m of operational space at the plant at a cost of €115m, which includes a new logistics building and battery sequencing hall. It has also expanded the press shop at the plant to accommodate the onsite pressing of all shell body parts for the EVs being made there. That move has enabled VW to remove 9,000 truck trips a year, equal to 5,800 tonnes of CO2, according to the company.

The new logistics hall has been built to support the press shop. It includes an automatic stacking line and a 30-metre high-bay warehouse, at a cost of €23m.

VW first introduced battery sequencing when the ID.3 went into production back in 2020. The delivery of the lithium-ion batteries to the line is fully automated, starting with the loading of the batteries in the service station at VW Group Components’ plant in Brunswick (Germany), shipping by rail, unloading at Zwickau, then storage, sequencing and lining up via conveyor technology.

Furthermore, those batteries are delivered in special returnable containers that can be used both for the shipment of lithium-ion battery cells and assembled battery modules. The battery cells are assembled into modules at VW Components plants in Braunschweig (Brunswick), Germany, for onward shipment to Zwickau using the same container.

Since 2018, VW has spent around €1.2 billion on converting the Zwickau plant from making cars with internal combustion engines (ICE) into an exclusively EV production plant supported by the latest digital technology.

As part of its Accelerate strategy, VW has a target to cut CO2 emissions per vehicle by 40% in Europe by 2030 (based on 2018 figures) and said it intends to be net carbon neutral by 2050. Emissions will be cut from manufacturing and the supply chain.

“Volkswagen will continue to increase the pace of e-mobility in 2022 with its Accelerate strategy and the expansion of the model portfolio,” said Dr Christian Vollmer, head of production at VW brand. “The Zwickau production plant has paved the way for the Group to do this with six ramp-ups from three brands in just 26 months. The knowledge and experience gained will help us to continue to electrify our production network quickly and efficiently.”

By 2030, VW said that at least 70% of the vehicles it sells in Europe will be all-electric vehicles. For North America and China, that figure will be at least 50%.

This year the carmaker is adding its German plants in Emden and Hanover and its Chattanooga plant in the US to the EV production network. The company said that this laid the foundations for building 1.2m pure battery electric vehicles at its sites in Europe, the US and China in 2022 based on the modular electric drive platform (MEB).