The shutdown of much industry, trade and logistics out of Ukraine is hurting automotive production and driving up logistics and bunker costs for European logistics providers.

Following Russia’s invasion of Ukraine, automotive manufacturers and suppliers have felt the pain from an effective closure of the country’s industry and logistics. There have beeen impacts to the supply of key metals, materials for semiconductors, such as palladium, as well as vital automotive components such as wire harnesses. 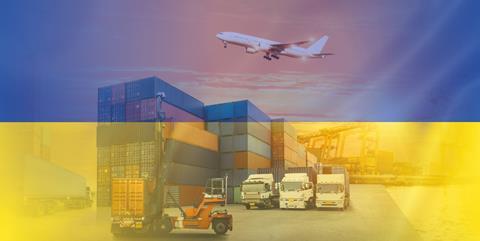 The ripple effects of disrupted logistics and freight routes are now also being felt across Europe and Asia, including from closed shipping and rail routes to skyrocketing costs of bunker fuel.

Down to the wire of supply chains
While the corporate retreat from Russia and subsequent stop in production there has been reported, European vehicle manufacturers have also struggled directly with shortages in components sourcing and production from Ukraine. Overall, there are 22 foreign companies that produce automotive parts in the Ukraine at 38 factory facilities, according to Ukraine Invest.

Of that production, one of the most important to the automotive supply chain is for wire harnesses. Leoni, for example, a global producer of automotive wire harnesses, has closed its two plants in Stryi and Kolomyja, both in western Ukraine. Stoppages at Leoni, as well as other suppliers including Fujijura and Nexans, have impacted production of vehicles in Europe from carmakers including BMW, Mini, Volkswagen and Porsche.

For the current financial year, the planned production of the two plants in Ukraine was expected to generate combined sales of €300m ($330m), while the company’s business activities in Russia were expected to account for €100m. Leoni estimates that its core assets in both these markets, including property, plants, equipment and inventory, are worth around €125m.

For the wider automotive industry, the expected volume of wire harnesses from plants in the region are now effectively written off. European automakers who rely on Leoni have announced they cannot resume production until supply has been reinstated.

Leoni is using its production bases in North Africa including Tunisia and Morocco as well as bases such as Serbia and Romania to supply its OEM customers in Europe.

The tier one supplier added that the consequences of the interruptions in Ukraine on the European automotive production were “dire”.

Fuel and logistics costs
The impact on logistics and freight is also increasingly significant, both in terms of goods, trade routes as well as wider costs impacts.

Ukrainian ports are closed, rail freight links have rerouted, and ship owners are avoiding the Black Sea region. The port of Odessa, one of the region’s largest container terminals, is closed. Imposition of sanctions on Russia, and the closure of manufacturing facilities in the Ukraine because of the war, mean that neighbouring countries in Europe also expect a sharp drop in freight, including by rail.

Logistics companies, including DB Cargo, Kuehne and Nagel, DSV and Geodis, began suspending operations in Ukraine, Russia and Belarus since the start of the invasion February 24. All services, including air, land and sea are now currently curtailed to the region, with the only deliveries being that of humanitarian aid.

These interruptions included suspension of services on China-Europe rail links, which pass through Russia, from European logistics companies such as DB Schenker and KN, many of which had seen growth in services for the automotive industry in recent years, including as alternatives to air freight and sea freight.

Over 70% of Ukraine’s exports and imports go by sea, of which three-fourths are handled by the port of Odessa. As of mid-March, around 100 merchant ships are said to be in Ukrainian waters, with 2,000 seafarers on board. All Ukrainian ports are closed, and carriers have been advised to avoid the region. The number of vessels trying to get out of the area by the Kerch Strait is building up by the day. Meanwhile cargo is stuck at the now closed ports of Mariupol and Odessa.

The maritime transport industry has been hit especially by soaring bunker costs because of rising oil prices and the closure of most parts of the Black Sea. According to logistics firms, however, overall freight rates have not risen, leaving many squeezed by costs.

Logistics companies are in some cases considering introducing surcharges to compensate for the longer delivery times, higher fuel and bunker costs. Airfreight companies FedEx and UPS have already announced surcharges. And other operators in maritime and road transport are likely to consider this, too. However, it will take some time for these surcharges to be paid by customers, leaving some logistics companies struggling to manage the escalating costs.

According to the Association of European Vehicle Logistics (ECG), the vehicle logistics industry in the region is feeling the effects of these cost rises particularly hard. ECG’s executive director, Mike Sturgeon warned that some vehicle logistics companies would simply not be able to continue trading in these circumstances.

“Extraordinary times call for extraordinary measures and, unless contracts are revised quickly, what is left of the industry will grind to a halt as cashflow issues strangle operations,” he said. “The OEMs and other clients need to immediately amend contracts to allow a much faster adaptation to changes like fuel prices, and they need to be fully transparent with their suppliers about future volumes so capacity can be planned.”