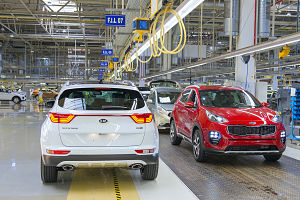 Two new international vehicle handling rail services have begun operating in recent weeks out of Spain and the Czech Republic.

The first, operated by Takargo/Ibercargo, is being used to move Renault vehicles from Spain to Portugal, with trains originating in either Venta de Baños or Valladolid in Spain and running through to Vale da Rosa in Setúbal.

In its first two weeks of operation, two trains were run, each consisting of 205 vehicles being handled by the CAT/Renault reception facility close to the Port of Setúbal. The client is Spanish National Railways subsidiary Pecovasa and the contract, which is for 12 months, includes the use of Pecovasa wagons with Vossloh Euro 4000 locomotives provided by Takargo/Ibercago.

In Portugal, the trains are routed via a special alignment at Vilar Formoso, where 530-metre long formations can be accommodated.

The second new rail service runs between the Czech Republic and Italy. Managed by DB Cargo Italia, this runs via Tarvisio three times a week, carrying cars from the Czech Republic and Slovakia to the Il Faldo distribution hub at Collesalvetti, in Pisa. From there, they are moved by road transporter to their final destination.

Of the three trains a week, two originate from Hyundai’s Czech car plant at Dobra and one from Kia’s manufacturing facility at Žilina, in Slovakia.