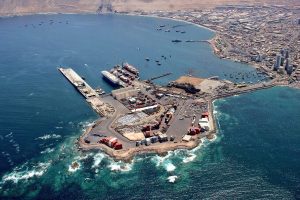 The Chilean port of Iquique has unloaded nearly 8,000 finished vehicles in the last 15 days, headed to dealers in the local area, according to reports in the local maritime information source Mundo Maritimo.

The vehicles were processed by terminal operator Iquique Terminal Internacional (ITI) and moved to the dealers through the Iquique Free Zone (Zofri).

The terminal’s operations manager, Henry Balboa, said this kind of operation was evolving into a longer-term trend.

The inbound vehicles were unloaded from a total of seven vessels, including those from NYK Line. Around 80% were sent directly to Zofri with the remaining 20% going to destinations in either Bolivia or Paraguay.

Separately, Contopsa, which is part of APM Terminals, has resumed stevedoring activities at the port of Iquique after an absence of several years. On November 12th, it offloaded 41 trucks weighing 794 tonnes at the port’s public quays. According to regional manager Máximo Martínez, this was the result of new investment made by the company in equipment at the port.