Is expendable packaging too expensive? 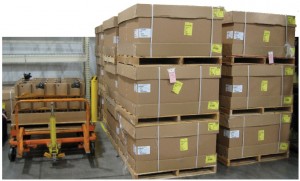 Depending on its use, received wisdom about one-way packaging in the automotive supply chain does not necessarily apply

In this story...
In an assembly plant somewhere in Detroit, there’s something going on that, according to conventional automotive industry custom and practice, shouldn’t be. A semi-automated arm is reaching into a crate and pulling out steering arms shipped from China, ready for installation on the assembly line.

The big no-no? The packaging in question is expendable, single-use cardboard. Carefully designed so as to enable the semi-automated arm to pick up the components as easily as possible, the switch to expendable packaging is credited with delivering a $3m saving.

It’s a move that’s emblematic of some counter winds that continue to blow through the automotive industry. As far back as the dark recessionary days of 2009, a one-day AIAG conference on reusable packaging heard that the need to make cost savings was prompting a re-think of the virtues of returnable packaging.

“All bets are off,” summed up a report of the event. “According to participants from Ford and Chrysler, each part is now analysed on its own merits and if cost savings cannot be identified by moving to reusable packaging – especially for low-volume or globally-sourced components – then they can now be delivered to the line in disposable packaging.”

So, has the industry been back-pedalling from a ‘no expendables, no exceptions’ mantra? Although the preference is still towards returnables, several trends are tipping the balance towards expendable, at least for certain flows, or often in combination with returnable packaging. Not just in logistics parks or crossdocks, where the components inside will be unpacked, then re-packed into returnable containers for the short leg to the assembly lines. Some experts see efficiencies in moving expendable packaging all the way to the line, which would strip out the added cost of the unpacking and re-packing operations.

While the long-term protection and efficiency benefits of multi-use packaging make it a clear winner in many ways, expendable has a niche. What’s important, say industry insiders, is that manufacturers are flexible, and consider all their options when engineering a packaging system.

The automotive industry’s traditional antipathy towards expendable packaging going line side is rooted in three, well-grounded axioms – one to do with cost, one to do with quality, and one to do with operational efficiency.

From the cost perspective, says Camille Chism, supply chain packaging engineer at Johnson Controls and a former packaging engineer at Chrysler, there’s no denying that in an industry striving to be lean and low-cost, the use of throw-away packaging represents an obvious waste. From the point of view of the overall supply chain, it’s a waste of resources. Compared to reusable containers such as totes, a decision to use expendable packaging means the supply chain is buying something, using it once, then throwing it away. Secondly, she adds, expendable packaging consumes labour and organisational resource. Instead of returnable containers simply being subsumed – almost for free – within the reverse leg of the logistics flows that delivered the inbound parts to the line, an extra outbound material flow is introduced, requiring people and equipment to handle it. 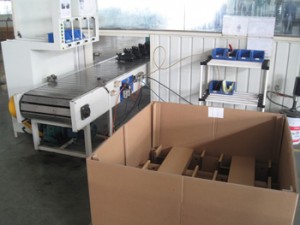 Disposable packaging is generally seen as wasteful, but it has many flexible uses both as dunnage as well as for transporting parts

Plastics. Accordingly, automotive manufacturers prefer to keep cardboard packaging out of their plants to avoid the possibility of dust and contamination that can affect sensitive electronics, powertrains and vehicle finishes.

Finally, returnable packaging in the form of plastic and metal totes and stillages is generally considered to be more ergonomically efficient for presenting components to the line, points out Chism. Expendable packaging, on the other hand, tends to be multi-purpose and, if made of cardboard, may lack the integral strength to support components of any weight in a particular orientation.

It’s easy to see why returnable packaging holds such sway within the industry. It has considerable longevity, is built with line-side efficiency in mind, presents fewer contamination problems, and ‘piggybacks’ on the existing reverse logistics flow to return to source at minimal cost.

Anyone who has worked in container management and done the maths of missing or damaged containers, knows that managing returnable loops is not always easy. For some supply chain flows, it’s just not suitable at all.

“The general rule is: the longer the logistics leg, the less practical it is to return returnable containers,” notes packaging expert Felix Meyer-Horn, a former chief executive at packaging firm Groupe Dusogat, and now chief executive at advisors Damorin. “Look at most returnable packaging in the automotive industry; you’ll see it circulating around very short loops. Try and do the same thing in respect of parts sourced from China, and it won’t work.”

The distance imposes much less certainty as to when – or even if – those returnable containers will return. Equally, the time taken to ship containers over the distance involved means that automotive companies must invest in building a considerable fleet of returnable packing, to cater for all the containers on the ocean at any one point in time. Finally, the assumption of a low-cost or free return leg doesn’t hold: while freight costs to China are relatively cheap, that isn’t the case in respect of freight routes from China.

"When you’re putting lots of small parts in a box – 150 to 200, say – then there’s not enough scale to make returnable packaging a worthwhile option" - Dan Roovers, Orbis

“The length of the supply chain is a key determinant of the choice of packaging,” agrees Ian Milne, business development manager at expendable packaging specialists IPS Lando. “The further away you are as a supplier, the less comfortable you will be relying on returnable packaging that is exposed to all the costs and risks of shipping returnable packaging back from North America or Europe.”

Those costs and risk don’t just apply to trans-ocean distance, adds China-based Milne. Look at logistics flows occurring within China or within other emerging markets; and the quality and nature of the transport infrastructure between customer and supplier can also predispose trading relationships toward expendable packaging, especially when considerable distances separate customer and supplier.

Finally, not all automotive trading relationships actually have a return leg, which is an obvious problem for returning containers, as there won’t be a ‘free’ reverse logistics leg to piggyback upon. Examples of such one-way automotive trading relationships include complete knockdown kits (CKD), as well as spare parts, especially those sent over long distances, or to emerging markets.

While the arguments in favour of returnable packaging are compelling over shorter distances and simpler trading relationships, they’re far from universally applicable. In an industry undergoing a considerable process of globalisation, those exceptions aren’t going to go away any time soon.

In other words, he says, a level of cubic utilisation that would be acceptable over short domestic logistics legs could well be regarded as unacceptably expensive if a decision was made to source the components in question from overseas. If purpose-constructed packaging is being designed to suit the needs of particular components and logistics flow, he says, it makes sense to design the packaging so as to optimise multiple parameters, not just cubic utilisation.

“In such cases, our goal is to design packaging so as to minimise total cost,” Murcott explains. “It’s about maximising the cubic utilisation, minimising damage, minimising re-packing, choosing the right material, then reducing the production and handling cost when placing components into packaging and taking them out. It’s generally the taking out that is regarded as the most important, as it’s the automotive vehicle manufacturers themselves who are doing it.”

In the case of smaller components, expendable packaging also finds a ready niche, say packaging experts. “When you’re putting lots of small parts in a box –150 to 200, say – then there’s not enough scale to make returnable packaging a worthwhile option,” says Dan Roovers, vice-president of automotive sales at specialist packaging manufacturer Orbis, where automotive industry sales account for around half the company’s revenues. “In that situation, shipping in expendable packaging might make sense.”

Similarly, the growing use of pooled returnable packaging, with packaging fleets operated by specialist such as Macro Plastics, Chep, and Surgere, creates a niche for expendable interior dunnage to hold and protect components within standard-sized returnable totes and boxes, he adds.

Die-cut corrugated plastic dividers, moulded foam and sewn fabric bags also have their places as interior dunnage, says Roovers, and can easily be reused. However, the more difficult it becomes to organise that return, the more likely it is that manufacturers will combine pooled returnable outer containers with expendable interior dunnage, with the dunnage in question being either plastic or cardboard. 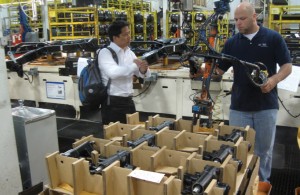 Wood, too, has a role to play, says Damorin’s Meyer-Horn. Not only are there instances of wood displacing plastic in automotive use (as a renewable resource, wood is greener than plastic, he points out), but it also has several other advantages over the materials conventionally used for returnable packaging, such as steel and plastics.

“Wooden packaging can easily be dismantled and repaired, and while cheap, is sturdy enough to use as frames for heavy items, such as engines and gearboxes – and also then be able to fit in other things around that frame,” he notes. “What’s more, wood can easily be combined with other forms of expendable packaging, such as cardboard, to form a combined solution that can be readily dismantled for recycling.”

“Here in Europe, we assume that wooden one-way packaging will be crushed or dismantled at its destination,” he points out. “We don’t think of it being adapted by low-cost labour, but look closely and you’ll see examples of one-way wooden packaging being repurposed in just this way. In Brazil, for instance, I’ve seen wooden packaging used for one-way CKD shipments being adapted to form returnable packaging for spare parts distribution.”

“Too many automotive companies have a standard packaging specification, which they view as gold, and from which they won’t and don’t deviate, even when they should,” he says. “Routinely, the industry is bringing in components in expendable packaging and repacking them into returnable containers deemed suitable for line side. Instead, they should be saying: ‘can we design expendable packaging that is actually suitable for line side?’ That would mean components don’t need to be repacked in a warehouse or crossdock a mile away.

“Having a standard is great; the trick is in knowing when to deviate from it,” he said.

Nickel, a former global manager of packaging engineering at Visteon, gives the example of when the supplier switched from using a 40ft containers to import interior components from China, to a ‘high-cube’ container. Moving to a hybrid solution involving custom-made expendable cardboard packaging saved several million dollars a year.

“The cost of shipping the individual container was higher, but with custom-sized expendable packaging it was possible to achieve a higher packing density, thereby delivering a lower per-piece cost,” he says. “But you don’t see such opportunities unless you look at the total cost – the cost of the packaging material, labour cost, transportation cost, and storage cost. Aggregate to a total baseline cost, then look at what you can do to drive that baseline lower.”