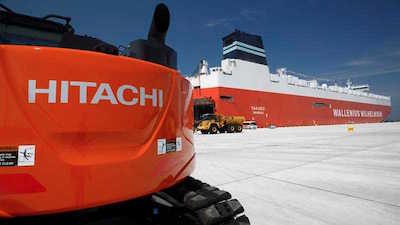 The port of Hitachinaka has opened a new terminal for the handling of construction and mining machinery as part of a major expansion programme for the port. The terminal is owned by the Ibaraki prefectural government.

The port is around 100km north-east of Tokyo and located near a production hub for equipment makers Hitachi and Komatsu. Both have factories next to the port.

Wallenius Wilhelmsen Logistics (WWL) provides services for both manufacturers, including three to four sailings per month from the port to North America. WWL was present at the ceremony marking the opening of the terminal, along with the Hitachi and Komatsu and representatives from the government. Also present was its vessel MV Tarago, a new generation Mark IV ro-ro vessel.

“As WWL has built a good and strong relationship with [the Ibaraki government] over the years. They asked us if we could arrange having a vessel alongside the new terminal loading Hitachi and Komatsu units during the inauguration,” explained a spokesperson for WWL.

WWL's vessel MV Talisman was amongst the earliest vessels to call at Hitachinaka after the Japanese earthquake in 2011, arriving on June 1st (he first was ECL's car carrier on April 25th on route to Indonesia).

According to WWL, the new terminal at Hitachinaka has been built by using landfill ash from the adjacent coal power station, part of the expansion programme at the port, which will also see it develop into a major export hub for Fuji Heavy Industries and Subaru automobiles in the future.

WWL would not disclose the volumes it handles for Hitachi and Komatsu. It said that it had long-standing relationships with both customers, and that they were two of its major customers for rolling (or high and heavy) equipment.