JLR will use flexible logistics to support engine production in UK 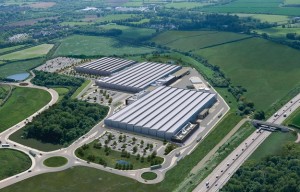 Jaguar Land Rover has opened its new £500m ($800m) Engine Manufacturing Centre in Wolverhampton in the UK Midlands for the production of the Ingenium engine family, the first of which will be a 2-litre diesel engine for the Jaguar XE.

To support production at the 100,000 sq.m facility the company has built in a logistics system that includes specially adapted cargo trains that will deliver parts to the assembly line from two main receiving areas – five bays in the assembly area and two in the raw materials area. According to the carmaker the manually operated cargo trains, which are supplied by forklift and platform truck maker STILL, will make 133 movements a day, supporting movements for “a huge volume of engines”.

“This process has an inherent capacity for flexibility, allowing logistics operations to keep up with the rapidly evolving demands of the modern automotive industry,” said the carmaker in a statement.

JLR has a contract with Syncreon for the inplant logistics at the facility and DHL will be handling inbound shipments.

“As with our vehicle manufacturing plants, our logistics partner is DHL,” confirmed a spokesperson for JLR. “They provide delivery into the plant for all of our production parts, on a just-in-time basis. Once inside the facility, the parts are transported by Syncreon.”

There are 71 suppliers to the plant, 30% of which are based in the UK, and each engine derivative will include around 245 parts.

According to the company, when operating at full capacity, the Engine Manufacturing Centre will employ 1,400 people with a further 5,500 jobs created in the supply chain.