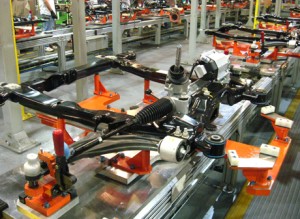 Comprehensive Logistics, US-based third-party logistics provider that manages the delivery of automotive parts and handles sub-manufacturing for OEMs, has announced it will make 66 employees redundant at its Lansing plant in Michigan.

On a Worker Adjustment and Retraining Notification document that was filed with the state of Michigan, Comprehensive Logistics said it needed to make both salaried and union workers redundant.

However, despite the latest round of job losses, in autumn last year, Comprehensive Logistics announced that it planned to open factories in Spring Hill, Tennessee to supply GM’s Spring Hill Assembly Plant, which manufactures the Chevrolet Equinox. This is part of GM’s initiative to get suppliers to move closer to its plants to reduce costs. After winning a new five-year contract with GM, Comprehensive Logistics announced it was investing $30m in equipment and robotics at the new Spring Hill plant.

The 3PL also announced last year that it was moving just two miles from Ford’s Dearborn Truck Plant to aid the manufacturing of the F-150. The company announced a $19.1m investment towards a plant on Wyoming in Detroit that was predicted to create around 240 full-time positions.