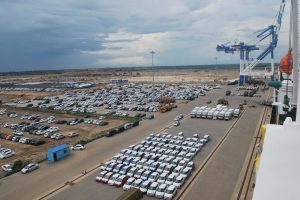 Recently, K-Line established a new transshipment record at Hambantota, involving the dropping off of 3,300 Indian-built vehicles to be later rotated out by sea to customers in Africa.

According to K-Line's local agents, ABC Shipping, the Japanese company believes that Hambantota has very definite potential to fulfill a key transshipment role, in the process speeding up existing cargo delivery times. The port, it was noted, has implemented a series of developments since it began operating in 2012.

Wasantha Talagala, managing director of ABC Shipping, explained that K-Line is now conducting stevedore training at Hambantota in advance of ramping up transshipment volumes. The training programme, which is being overseen by the Sri Lanka Ports Authority (SLPA), will be completed by the end of January this year.

ABC Shipping’s general manager, Tressel Silva, also revealed that K-Line's decision to consider Hambantota as a hub had been driven by the port authority's decision to offer highly competitive tariffs.

Since the port opened for business in June 2012, some 422 car carriers have called there, generating 69,912 import units and 194,152 units for transshipment.

Massive development is being undertaken in and around the port to allow Hambantota to offer a range of services, including bunkering, thus ensuring it can operate as a hub port in the Indian Ocean and ensure that everything needed to guarantee supply chain management is in place, too.

Previously, car carriers called at Sri Lanka's main port of Colombo; however, this facility was rife with delays, prompting the national ports authority, the SLPA, to reroute all ro-ro shipping to Hambantota as of 6th June 2012, which has subsequently shown itself to be a reliable facility for international maritime transport in the region.

Read more about the rise of Hambantota port here