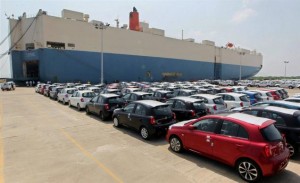 Competition to handle export vehicles from India's east coast is hotting up with the announcement that Kamarajar port (formerly Ennore port) has edged head of the port of Chennai to become the most important new vehicles handling facility. The news follows the announcement last month that L&T Ports, which operates at the Indian port of Kattupalli, north of Chennai, has begun handling the export of finished vehicles and construction equipment for the first time.

In comparison, previously dominant Chennai Port Trust saw volume decline from just more than 59,600 to 44,530. Nevertheless, the port forecasts a possible end-of-year figure of 200,000 units, following notice from Hyundai that it will increase shipped volumes through the port. Significantly, Chennai did not attribute the decrease in volume to a global slowdown but rather more to do with the changing export schedule drawn up by manufacturers.

Nevertheless, there could be other reasons. Both KPL and L&T Kattupalli have better road and rail access, while each has significant parking areas, equipped with a variety of facilities. They are also able to handle vehicles in a cleaner environment.

The chairman and managing director of KPL, M.A. Bhaskarachar, said, “More and more vehicle manufacturers are approaching us, as we do not levy any extra charges. On the other hand, we offer discounts with increasing volumes. We have parking space for 15,000 vehicles spread over two yards. And a congestion-free atmosphere adds to our advantage.”

KPL also revealed that the port is in line to attract investment up to $1.5 billion for a whole raft of improvement projects, of which the private sector will be responsible for $1.2 billion. This would boost cargo capacity from 30mtons per annum to 110m tons over the next three years. The automotive trade would be a direct beneficiary, since dredging would allow larger ships to call and new berths would be built specifically to handle a further 300,000 vehicles annually.

Ashok Leyland, Daimler, Nissan, Renault and Toyota are already major clients, while KPL has also mooted the provision of a new coastal service for the automotive industry, connecting north and south India.