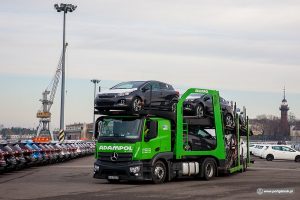 [UPDATED] Kia Motors has started moving spot shipments of passenger cars made at its Zilina factory in Slovakia through the port of Gdansk in Poland for delivery to the UK. The Korean carmaker is working with Polish transport and logistics provider Adampol for the transport and processing of the vehicles. The main volume of Kia's exports to the UK continue through the port of Cuxhaven in Germany.

The first shipment of Kia Cee’d models arrived at Gdansk port on November 21st. The Zilina factory also makes the Sportage and Venga models. Kia's total volume for the UK market amounts to about 50,000 cars a year.

Adampol is already moving Hyundai and Nissan volumes through Gdansk following contracts signed earlier this year. The Polish carrier signed a three-year contract with the Renault Nissan Alliance in March for Nissan imports from Japan, Spain and the UK for delivery to markets in central and eastern Europe, including Poland, Ukraine, the Czech Republic, Slovakia and Hungary.

That followed a separate agreement in January under which Adampol moves volumes of Hyundai vehicles from its Czech Republic plant in Nosovice to Gdansk, also for delivery to the UK, with ocean services provider K Line; volumes that were previously moved via Zeebrugge. Along with transport, Adampol is providing services that include storage, waxing and pre-delivery inspection (PDI).

"This is yet another success for Adampol, which unquestionably contributes to building the brand of the port of Gdansk as an important logistics hub for the automotive industry," said Lukasz Greinke, president of the board of the Port of Gdansk Authority.

The port of Gdansk has also attracted more commercial vehicle shipments since Adampol started operations there. According to Greinke, at the end of October this year it had transhipped more than 60,000 commercial vehicles, a 400% increase on the same period last year.

“Our position keeps getting better and it is not a coincidence, but the effect of hard work, years of talks and determination," said Greinke.