Kia starts roll out of import volumes in Mexico 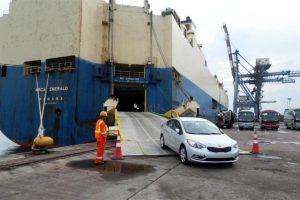 In Mexico, the first Kia Motors' Sportage SUV models, which are due to be made available for sale as of July 1, have begun to arrive at the port of Veracruz.

Small volume consignments have been shipped from Kia’s Zilina plant in Slovakia. They were delivered by Hoëgh Autoliners' Beijing and Michigan Highway vessels, consisting of 59 units and 250 units respectively.

Veracruz is Mexico's leading port for handling finished vehicles. In the first four months of this year, throughput increased by 25.5% to 244,542 units. Volkswagen, Nissan, Ford, Chrysler and General Motors already have a major presence at the port.

Beyond the port, the Sportage vehicles will be delivered to ten cities across Mexico, where they will be marketed by 22 Kia dealers.

The manufacturer has also taken delivery of the first 269 Sorento models assembled at Georgia in the US. However, these have been transported to Mexico overland.

At the same time, Kia Motors is also importing Forte units built in South Korea, which are due to be made available for sale at the same time as the Sportage and Sorento models. However, these are being imported via the port of Lázaro Cárdenas, which the manufacturer first began using in January this year. The first batch of 872 units of this model were recently handled at the Terminal de Usos Múltiples II by Amports de México, having been transported by the Arca Emerald. As of the first quarter of 2016, the Forte will be built in Mexico at the Pesquería plant in Nuevo León.

This year, Kia Motors expects to have 2,450 units of all three models available for sale.

By the end of the year, the Optima model will also be made available in Mexico.