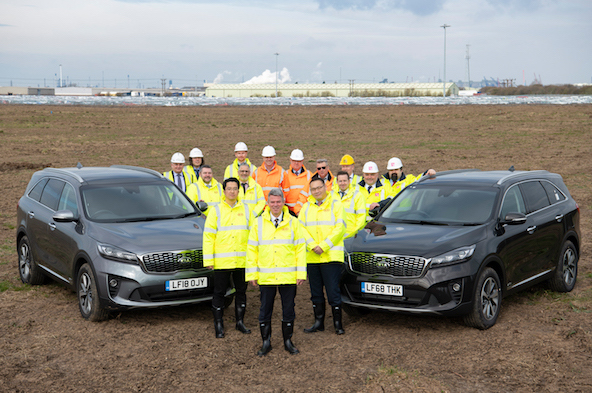 Kia Motors is to create additional capacity for 8,000 more cars at its UK import and distribution centre in Stallingborough, North Lincolnshire.

The company has secured 16.8 hectares of extra land from Associated British Ports (ABP), adjoining Kia’s existing distribution centre which can hold up to 17,000 cars on 35.6 hectares. The sites are 5km from the port of Immingham on the Humber estuary.

The extension will have access via a road bridge in addition to a separate transporter entrance, allowing Kia flexibility in utilisation, the company said.

A multi-million-pound contract has been awarded to Clugston Construction, with development expected to take 32 weeks and the new secure compound fully open in November.

The OEM said the decision to go ahead with the project highlights confidence in the UK and its own continued presence in Britain. The country is Kia’s fifth largest market globally and the company ranks in the UK’s top ten car brands for sales.

The Stallingborough distribution centre is a key hub for all Kia cars entering Britain from factories in Slovakia and South Korea, where the OEM has its headquarters. More than 92,500 were imported into the UK last year, and the company expects the figure to rise in the coming years. The goal is to reach 100,000 cars a year by 2020,

President and CEO of Kia Motors UK Paul Philpott said: “This development is central to our growth plans in the UK and will allow us to expand our existing facilities to allow us to continue our commitment to the UK new car market, as well as delivering a seamless port-to-dealership process for our customers.” The company has 190 dealers in the UK.

ABP Humber head of property, David Morris, said: “We are proud to be able to support the growth of Kia Motors, which is an important employer in our region. It’s fantastic to see that such an internationally-acclaimed business is committed to the Humber region for many years to come.”