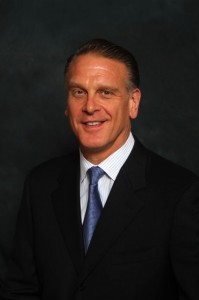 Eric Kirchner (left) has resigned as CEO and member of the board of directors at UTi Worldwide. He has been replaced in the CEO role by Edward Feitzinger, who moves from his role as executive vice-president of Global Operations, which he has held since 2012. Feitzinger has been with the company since 2010 and previously served as executive vice president of Global Contract Logistics and Distribution.

UTi has not given a reason for Kirchner’s sudden departure. Chairman of the board Roger MacFarlane issued a simple statement: "We are thankful for Eric's leadership over the past six years through the company's business transformation and wish him well.” A spokesman for the company said there was no further comment.

MacFarlane also welcomed Feitzinger to the CEO role and said he would provide the leadership necessary for UTi to realise its full potential.

“Ed's years of experience in the supply chain industry in combination with his proven success leading UTi's contract logistics and distribution business make him the right choice to lead the company," added MacFarlane.

Feitzinger said he was honoured to take on the role at an important time for UTi. “I look forward to working closely with the board, the senior leadership team and our dedicated and hard-working employees to deliver improved value to our clients as we focus on the solid execution of our next strategy."

Kirchner has overseen a major transformation at the company as it sought to integrate what had been a fairly decentralised operation across four regions into one global entity, with a quarter of its business now made up of automotive contracts.

As Kirchner told Automotive Logistics back in July this year, the automotive industry provided it with a good example of where it could learn to translate successful operations in one part of the world to other regions for the same customers; part of its Client as One plan.

Kirchner said the company was focused on growth and over the last two years had put a lot of focus on export consolidation, sequencing and line feeding, all of which were specific to automotive. Last week it was also revealed that the company had signed a deal with Chinese finished vehicle and aftermarket provider, Beijing Changjiu Logistics. That partnership allows each company cross-sell core services to automotive customers both within and beyond China over the next year. Subject to review, the partnership will also look to create a logistics service provider in the Asia Pacific region that will broaden the scope of services on offer, including quality management and small assembly.