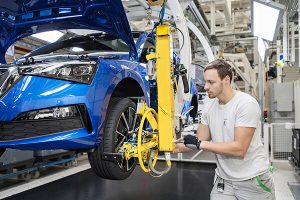 The all-new Scala has started rolling off the assembly line at Škoda’s Mladá Boleslav plant, in the Czech Republic – the first model from the company based on parent Volkswagen Group’s MQB-A0 platform.

Production of the Scala, which was designed and developed in Mladá Boleslav, involves certain components being produced in parallel with the vehicle production process, a spokeswoman for the OEM told Automotive Logistics.

“For example, when a body enters the assembly line, a supplier located a few miles from us immediately knows the vehicle’s specifications and can begin to produce a cockpit or other component,” she said.

“Due to the high number of cars and other components that Škoda Auto produces in Mladá Boleslav, we cannot leave them sitting in warehouses for weeks or even days,” she continued, adding that the company continuously optimised its production processes to avoid delays.

VW’s MQB-A0 platform creates uniformity in the front end across all models, including plenty of space in the interior’s front section. Other features such as wheelbases, track widths, wheel sizes and seat positions are variable, the spokeswoman said.

Common engines, transmissions, steering and chassis components can all be used in various combinations, as long as the engines are installed tilted slightly forwards and the distance from the middle of the front wheels to the pedals is the same, she told Automotive Logistics.

“The MQB significantly contributes to keeping the weight down thanks to its use of modern designs and high-strength steel,” she added.

The sharing of common architecture also enables driver assistance systems from higher-tier segments to be introduced, such as lane-assist, blind spot detection and adaptive cruise control, as well as providing greater safety and comfort in the compact car sector, according to Škoda.

CEO Bernhard Maier said the model set new benchmarks within its segment in terms of technology, safety and design.

The Scala will initially be made with four engines: three petrol variants and a turbocharged direct injection (TDI) diesel. A compressed natural gas (CNG) version will follow later this year.

The Scala’s sales launch is scheduled for the first half of this year. The company declined to be drawn on its target markets.