Indian logistics joint venture, APL Logistics Vascor Automotive (APLL Vascor), has increased its fleet of finished vehicle carrying rail wagons to 16 rakes, with an additional four rakes to be delivered this year. Each rake comprises 27 wagons and has capacity for up to 318 passenger vehicles, but can also accommodate two-wheelers and automotive parts. The equipment is supplied by Texmaco Rail and Engineering. 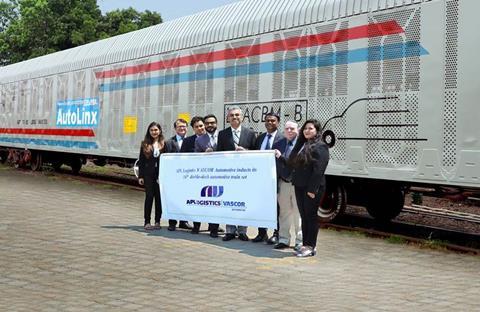 APLL Vascor launched its AutoLinx rail service for volume vehicle transport back in 2014 and was the first third party logistics provider in India to offer rail-based services under the Automobile Freight Train Operator (AFTO) licence administered by Indian Railways.

According to the company, AutoLinx now provides door-to-door transport of vehicles across most of India, with around 60 trains running a month. The service also includes a large fleet of car carrier trailers to support factory pickups and last mile deliveries. Ford and Honda are both customers.

Vehicle production and sales in India is on the increase and expected to grow by 36% over the next five years to 6.4m units. At the same time only around 5% of vehicles are moved by state-owned Indian Railways, something the government has been making efforts to increase with public-private partnerships as part of an overall target to move 20% of finished vehicle traffic on rail by 2026.

The GST, a federal taxation system, is gradually rationalising state and central indirect taxes, removing the need for local border checks and making the movement of goods across states more efficient and less costly.

“GST has reduced the physical check points of cargo at state borders and enabled location of stockyards dictated by logistics considerations rather than interstate taxes,” said Villalon. “This in turn will enable faster supply chain lead times, larger transport lot sizes, and increased lane density. Both automakers and consumers alike will benefit.”