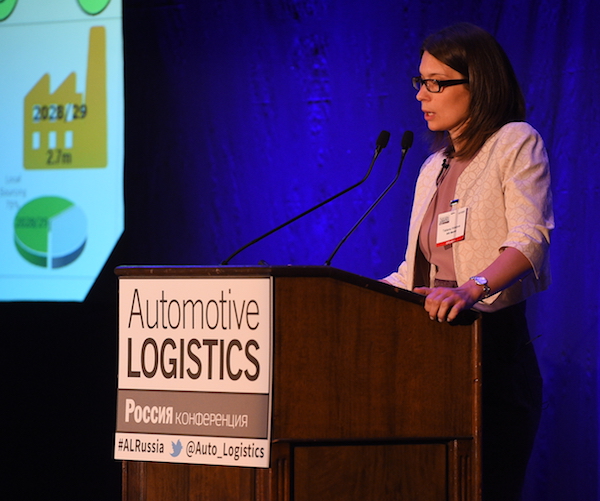 The light commercial vehicle (LCV) market in Russia is experiencing a better recovery than that of light passenger vehicles – though it will be some time yet before it achieves pre-crisis levels, Tatiana Hristova, manager CEE – European Light Vehicle Sales Forecast at IHS Automotive, has suggested.

Speaking to Automotive Logistics at the Automotive Logistics Russia summit in early July, Hristova conceded that the Russian commercial vehicle market – which includes trucks and vans but in which LCVs up to 6 tonnes gross vehicle weight (GVW) represent a majority – had declined between 2012 and 2015 as a result of the economic downturn in the country, including a 33% slump in 2015 alone.

But last year, she stressed, the overall CV market finished slightly up.

“For 12 consecutive months already, the CV market has been showing a positive dynamic,” she said. “The growth rate in February 2017 reached an impressive 29% [compared to the same month the previous year], with 18.9% in March – a clear sign of pent-up demand and the start of a recovery in this portion of the market.”

While that slowed to just a 6% gain in April and 4% in May, followed by a 3% decline in June, this was just a natural consequence of the start of a new quarter and the extremely high growth rates seen in the first quarter, she said.

The rising trend in CV sales stems from greater optimism about manufacturing and retail in the country and fits in with recent economic forecasts, Hristova said.

Suggesting that CV sales would continue to make progress during the rest of the year, Hristova pointed out that recovery in the CV market was traditionally the precursor to a general automotive market rebound. But she cautioned that pre-crisis sales levels of 200,000 LCVs a year might not be reached again before 2029.

“The recovering CV market has motivated foreign OEMs to reactivate localisation projects for CVs in Russia. So we now expect that the Renault Master, Peugeot Partner, Citroën Berlingo, Peugeot Expert and Citroën Jumpy will all be added to Russian production, starting in 2019/2020, on top of existing domestic assembly of LCVs by Ford, Mercedes-Benz and Hyundai,” she commented.

“Localisation allows manufacturers to decrease the final price, which is especially important for vehicles used for commercial purposes. In the medium to long term, growth in the LCV segment will be constrained by an underperforming economy and retail trade, and the underdeveloped small and mid-sized business sector in Russia, however.

"Relatively stable CV sales in the recovering Russian market are already a very optimistic forecast, considering the lacklustre development of the economy there in the medium and long term,” she added.

Boosting demand for bigger vehicles?Meanwhile, automotive logistics providers in Russia have suggested that rising demand for LCVs will increase demand for their road transport services and thus help to stimulate the market for larger trucks.

[related_topics align="right" border="yes"]“In Russia, LCVs are typically transported by road. So growth in the LCV market will lead to a need for more automotive carriers to manage rising traffic volumes and this will lead to a rise in the total demand for trucks,” suggested Anna Komarova, head of the finished vehicle logistics commercial department at Gefco.

“In Moscow and Moscow Oblast, with the development of retail and production in the region and the simultaneous tightening of time limits on supplies around the city and Moscow Beltway, this market has all the prospects to grow in the coming years," said Pavlikov.

A lot of local deliveries take place by LCV in such areas, and LCVs are also increasingly being used for small deliveries, such as to transport spare parts to dealerships, he noted.