[Updated October 8th] Seating supplier Lear has doubled the size of its UK facility in Sunderland with a 3,500 sq.m extension in response to demand for car seating from its customers Nissan and Jaguar Land Rover (JLR). The move doubles its annual production capacity for the supply of car seat foam per unit from 300,000 to 600,000. The extension was opened last week. 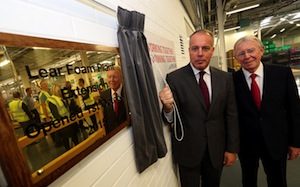 The Sunderland plant, which was Lear’s first foam manufacturing facility in the UK, will make foam for its assembly plants in the Midlands, including Coventry. Lear Sunderland currently manufactures seating for the Nissan Qashqai built in the Japanese carmaker’s nearby Washington plant. The extra capacity will also now feed new business from JLR via the Midlands.

“The existing facility has been producing Nissan Qashqai parts since 2011 and the additional capacity will support Jaguar Land Rover business where Sunderland will be supplying parts to our Lear just-in-time plants in the Midlands, who are supplying JLR with the full seat assemblies,” said Jim Casey, Lear Sunderland’s operations director. “We are currently ramping up production of parts for Jaguar’s XF vehicles. More programmes will be launching in the coming months, starting with the foams for the Jaguar F Pace at the end of the year.” 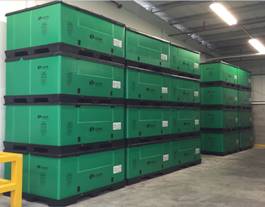 Greg Potts, Lear Sunderland's materials manager, told Automotive Logistics that the company was planning to ship around nine 40-foot trailers a week to its Coventry facility for supply to the Jaguar XF production line. The current haulier that is supporting the additional volume for that contract is based in Manchester.

"As other projects come online during the next 18 months Lear Sunderland expects numbers to increase to approximately 50 trucks a week," said Potts.

In terms of packaging, Lear is using collapsible containers that have been designed to optimise the foam shipments from Sunderland and to maximise space in the trucks, which means it is able to ship 48 boxes per truck.  Around 250 boxes can be returned when flat packed.

The multi-million pound investment by Lear is supported by £500,000 ($759,000) funding from the UK’s ‘Let’s Grow Regional Growth Fund’. The company said the extension of its plant would provide jobs for a further 100 people in Sunderland by the time production hits its expected peak in 2017.

Lear Sunderland operations director, Jim Casey, said, “The recruitment started earlier this year in line with our recruitment plan to get the first starters trained and ready for the start of production in June.

“We have already recruited over 40 new starters and will be continuing as production ramps up. We now employ over 400 people in Sunderland.”

Trueman said, “I welcome the commitment Lear has shown to a long-term future in Sunderland. The city is on the global automotive map and Lear’s new capacity, contracts and job creation rubber-stamp the importance of the city to this sector. We look forward to continuing to work with Lear to grow its business here in Sunderland.”