Logistics from concept to assembly at Magna Steyr

Magna’s contracting manufacturing arm, Magna Steyr, has developed a highly integrated approach to supply chain management, including the virtual design of logistics and supply concepts, some of which is being applied to other Magna plants 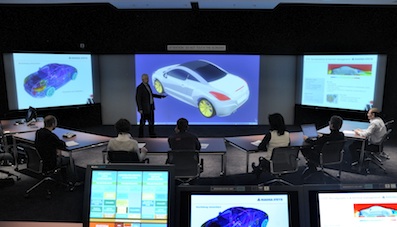 Magna Steyr’s automotive roots go back to the beginning of the 20th century, when Steyr-Daimler-Puch started to develop and produce the first vehicles in Graz, the capital of the Austrian state of Styria. It was one of Austria’s largest industrial conglomerates, producing passenger cars, engines, motorcycles, buses, tractors and off-road vehicles. Later it formed a joint venture with Chrysler, called Eurostar, to build vehicles at the company’s production complex in the Styrian capital Graz, 50km from the border with Slovenia.

Steyr-Daimler-Puch was broken up towards the end of the last century, with Magna International acquiring its engineering centre and vehicle assembly plant in Graz. Today, Magna Steyr is one of six operating units of the global supplier, recently enlarging its product portfolio in the field of fuel tanks, battery systems, door modules and rooftop systems, comprising a global network of around 30 plants.

These manufacturing sites are separate entities that deliver to global customers. With core contract manufacturing volume at Graz now around 130,000 units per year – in 2006 it was 248,000 – it is also part of the group’s diversification. Furthermore, Magna has also formed a joint venture with Russian contract manufacturer Avtotor to develop supply clusters and complete-knockdown kit vehicle assembly in Kaliningrad and Nizhny Novgorod.

Although it has an annual revenue of $2.8 billion in vehicle assembly, Magna Steyr is not a pure volume player. It has its own engineering specialities and has developed roof and door modules for vehicles built at Graz and elsewhere. The company has also showcased its component engineering by developing complete concept cars, such as the Mila series.

This integrated engineering and manufacturing approach is reflected in Magna Steyr’s global supply chain management division. According to Michael Druml, executive director, three years ago the company integrated purchasing, logistics and supplier development, which has meant that the department is involved from product engineering to production, spare parts and finished goods distribution. For Druml, this means that factors such as logistics costs, risk and performance have a much stronger influence in sourcing and supplier development activities. 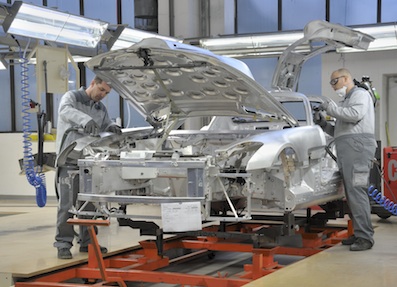 “We did this for the total cost of ownership and the ability to integrate the suppliers in a more collaborative approach,” says Druml, who joined the company as part of the Eurostar joint venture. “Often there is some tension between logistics and purchasing, but by doing this together we can really act globally. We can be proactive, spot problems earlier and resolve them.”

Druml adds that the integrated approach means that logistics and supply chain management have important roles to play in engineering both in terms of a logistics network – which is forged in collaboration with Magna Logistics Europe (MLE), Magna International’s central logistics organisation in Europe – as well as for upfront cost engineering, parts and packaging design. Using a ‘virtual design’ approach, according to Druml, Magna Steyr’s cost engineers study logistics implications for part shapes, packaging and locations before making sourcing decisions, then change the parts, racks or supply chain network.

“We can sometimes go further than logistics engineering and move into parts engineering,” explains Druml. “For example, it can be packaging, transport, cube utilisation, recycling and returnable packaging – there is a lot that can be influenced when you have engineering responsibility.”

The degree of design and planning integration that is possible for Magna Steyr’s supply chain management depends upon the business model that the company has with its OEM customers and the degree to which Magna Steyr has engineered components. At one end of the spectrum, an OEM might consign material to Magna Steyr for which the company never takes ownership. However, in cases where Magna Steyr has developed or modified the part or module, Druml and his team often have full sourcing responsibility.

There are in-between scenarios too, whereby Magna Steyr does what Druml calls an “operative purchasing act”. While the OEM makes the final decision, Magna Steyr does the purchasing preparation, including all the part numbers and change management. In these cases, Druml and his team play a strong role in supplier management and development. 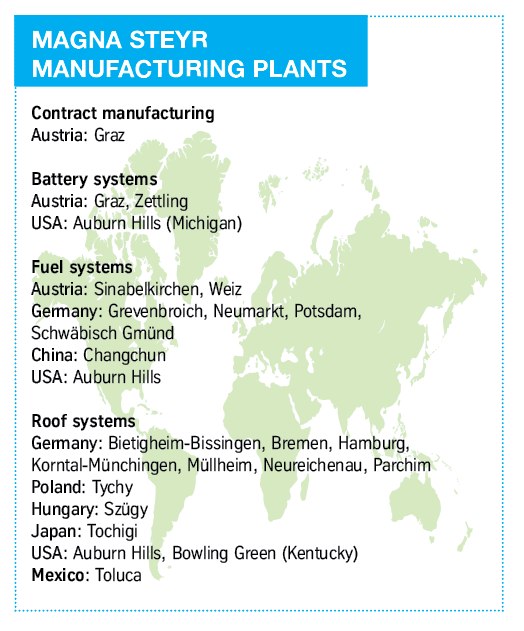 Druml believes that managing various business models with OEMs, including different IT systems, is part of what has made Magna Steyr Graz a centre of logistics innovation for Magna Logistics Europe and the wider group. The contract manufacturer has developed interfaces that communicate across different ERP systems, forecasting and supplier communication. Druml says the group takes best practice from each of its customers when developing its own systems and processes.

“Some of our customers focus on documentation, others on planning or forecasting, and we have the chance to take the best out of everybody and combine them together,” he says.

Regardless of the purchasing arrangement, Magna Steyr handles its inbound logistics free carrier on board (FCA) to control inbound deliveries (with the exception of a few commodities, such as paints and other hazardous material, which have special transport regulations). For the Graz plant, this volume is sizeable, amounting to several hundred daily truck deliveries. Magna Steyr arranges about 85% of that material directly in full truckload or milkruns, while the remainder moves through MLE’s groupage network. Beyond release, carmakers always take responsibility for vehicle logistics from Graz.

From a supply chain point of view, the Magna Steyr plant in Graz is highly integrated with no external warehouses or logistics centres (although a private logistics park near to the plant is home to several logistics provides and a vehicle consolidation centre). The group manages its dock and in-plant material handling in-house, while providers handle indirect material movements, internal transport and waste movements.

The plant has several Magna suppliers onsite, including a seating operation which is under the roof of another Magna group, Magna Exterior & Interiors.

“It’s a plant within a plant, and as such we share transport and bundle other common functions,” says Druml. “But we still treat Magna like any other supplier with separate shipping notices. We also monitor its shipments and performance in all areas.” 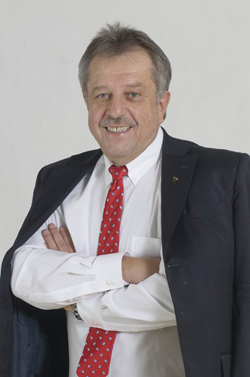 The plant is also advanced in its IT and supply systems. There is a transponder system that signals when trucks in the release yard should enter the plant and make deliveries. Within certain closed material loops there is also RFID signalling to manage call-offs. This has not yet, however, been extended to supplier routes.

With a Transport Management Module, which Magna Steyr has developed over the past decade, Druml and his team monitor and respond to all the operational management of the inbound supply chain and material flow, including truck deliveries, dock management, call-offs, pallet and empty container movements. The system will be rolled out to other parts of the Magna group through MLE.

This year, the plant will introduce several new innovations. In the newly rebuilt assembly line for the Mercedes-Benz G-Class, Magna Steyr will introduce new lean methods, including material sequencing closer to the line, reducing the number of forklift trucks and the use of new visibility tools. One of the more innovative systems will be a call-off system that delivers transport orders to forklift and tugger train drivers by tablet rather than by paper. All of the scheduling information will be shown online to the drivers.

“Our material call-off continues to evolve. First we were writing transport orders, then we were scanning barcodes, and later we were using RFID and now we will be using tablets,” says Druml.

Magna Steyr is considering another important material feed innovation, which Druml calls “last mile postponement”. It would involve a crossdock-type facility at the plant where inbound material is sorted according to dock destination. In this way, groupage freight or milkrun trucks could do pickups and loading with minimal handling, while the flow to the assembly line would then be optimised as close to the line as possible. 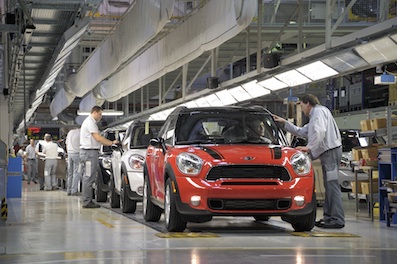 According to Druml, such a sorting system would improve traffic flows both into the plant as well as at pickup points downstream in the supply chain.

“Trucks are currently hopping from one plant dock to another depending on their consolidated load,” he says. “This would eliminate waiting times, truck stops and traffic jams. Also, with less handling at crossdocks prior to reaching the plant, you get more out of those assets.”

Other carmakers are also using such facilities. In North America, for example, Toyota uses ‘sorting centres’ to handle consolidated freight, with logistics providers organising inbound deliveries by dock destination. Magna has also introduced an onsite sequencing centre at its Magna Powertrain plant in Ilz, Austria, 50km from Graz. In many cases, such centres can increase production flexibility as well as the amount of material that can be sent direct to the plant or by milkrun.

“It’s very innovative to use these tablets, but what happens to the information? In the future, this needs to go all the way back to the raw material suppliers,” Druml says. “Such a simultaneous information flow would really be a big chance to smooth the supply chain and eliminate the classic bullwhip effect.”

Preparing to go deeper into the supply chain

While noting the innovations that Magna Steyr is introducing at the plant in Graz, Druml believes the greatest benefits will come when such efficiency is connected

Druml also envisions increasing complexity in future, from supply shifts to technological disruptions; like his colleague at Magna Logistics Europe, Jörg Blechinger, he believes that companies like Magna needn’t fear these changes, but they need to be prepared for them now.For Druml, the future lies in such integrated approaches to organising the supply chain, starting from the virtual design of material flow and equipment beforehand, and going right through to operational flexibility from lineside to sub-tier suppliers. He thinks that automotive should study other industries, such as hi-tech and computers, who are already managing highly global yet flexible supply chains.