Ceva Logistics has completed the integration of Gefco’s finished vehicle logistics business and set up its own division under the direction of the French logistics provider’s former chief operating officer Emmanuel Cheremetinski.

Former Gefco CEO, Luc Nadal, will head the European region for Ceva Logistics, its biggest region of activity, accounting for 50% of the company’s topline, according to Mathieu Friedberg, CEO of Ceva Logistics. 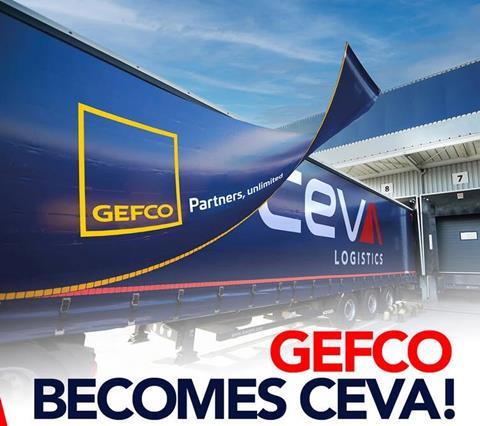 The rest of Gefco’s business, mostly in contract logistics and ground transport, is currently also being integrated into Ceva’s existing operations. That process is due for completion in 2023 and once the tied up will mark the end of the Gefco brand worldwide.

Gefco was previously majority owned by Russian Railways and was bought by Ceva’s owner, the container shipping giant CMA CGM, last year following Russia’s invasion of Ukraine, saving it from the impact of international sanctions. The integration of Gefco’s finished vehicle logistics assets into Ceva since then expands and strengthens the company’s logistics services in Europe and advances CMA CGM’s goal of providing end-to-end shipping and logistics services. It has already contributed to significant revenue gains for Ceva in 2022.

When it was bought, Gefco had 3,000+ rail wagons and 30 vehicle compounds across the European region, dedicated to moving new and used vehicles. Gefco also had a large fleet of vehicle haulage trucks, though a lot of these were subcontracted.

Mathieu Friedberg told Automotive Logistics that Ceva had “no intention whatsoever of reducing the current footprint of assets” and was, on the contrary looking to increase investments and grow the business internally rather than subcontract. Friedberg also pointed to the potential for partnerships to solve the immediate capacity crunch and urgent need for services to more efficiently deliver the backlog of vehicles in the wake of Covid disruption.

“We will also bring what Ceva already had in terms of contract logistics with a certain amount of players both inside and outside Europe in the automotive space, which will also open doors for the finished vehicle part,” he said.

Global offering
Ceva’s goals to maximise the potential of the Gefco integration go beyond Europe. It is bringing into the newly formed division existing finished vehicle logistics business lines in south-east Asia and Australia. From there, the company is planning further developments in North and South America, and is already in discussion with OEMs in those regions.

“This fifth product line we are putting into the Ceva portfolio puts us in a unique space,” said Friedberg. “We will be the only large 3PL out there that truly offers the service offering at that scale, from inbound logistics to the whole finished vehicle logistics offering.”

The company also has well-established logistics operations in Asia, particularly China, primarily its joint venture with SAIC’s logistics subsidiary Anji Logistics – Anji Ceva – a $1.4 billion business in China, doing 70% of its business within the automotive space.

“We are bringing this overseas competence to the table and capitalising on the ocean expertise,” said Friedberg. “We are also looking at how we can develop further what Gefco was doing in terms of chartering vessels, but we want to go beyond that.

That includes providing services for the containerisation of vehicles for export from China, a service that has lain dormant over Covid but which is now very much back on the agenda given the tightening in ro-ro capacity since summer 2022 because of underinvestment in vessels.

“We have easy access to containers… we have the Chinese presence and set up, and we are pushing these solutions to our customers,” said Friedberg. “We have already been doing quite a bit of this in the Middle East as well.”

Asked about the development of new digital tools and services for vehicle deliveries reflecting trends in online sales and personalised services, something Gefco was aggressively promoting, Friedberg that was part of the plan at Ceva too.

“We will pursue the new avenues that Gefco opened, including with new online players and in the way we position ourselves with the new energy vehicle players in China (and with Tesla),” he said. ”That comes with a different set up than what the historic OEMs were doing.”

Looking at the near term targets for Ceva’s finished vehicle services in 2023, Friedberg said number one was satisfy the demand of its customers, including for the clearance of back orders accumulated in the wake of Covid and the semiconductor shortage. He said the company was also focused on building the international scope of its vehicle logistics services both east and west. Friedberg said he Ceva was also focused on integrating the Gefco culture into its own and “continuing to be bold and ambitious”.