Magna Europe president, Günther Apfalter, puts logistics among his top five priorities in Europe, as he sees potential to improve costs and reduce CO2 emissions in the supply chain 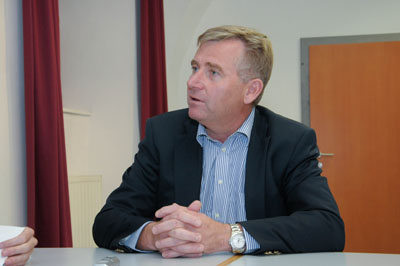 Since Günther Apfalter (pictured left) became president of Magna Europe in late 2010, a difficult European economy and increasing global competition in the automotive supply chain have not made it an easy tenure. You might therefore think that logistics would be a distant concern for a chief executive working in a stagnating market. But Apfalter puts logistics among his top priorities for Magna in Europe, and believes that it can make a real difference to the supplier’s bottom line.

“Logistics is certainly in our top five at Magna. It is one of the main ingredients of our daily operations,” he says. “This is a big cost portion on one side but also a big opportunity for improvement.”

Apfalter is busy enough to not be involved in the day-to-day operations of procuring logistics or managing material flow. He is one of Magna’s top executives, working with the heads of the company’s multiple divisions in the region, and a network of more than 120 plants and around 30 engineering and development centres. The role of president for Magna Europe was a new position that Magna created after the departure of Sigfried Wolf from Magna International as co-chief executive officer, leaving the company with one global CEO in Donald Walker. Apfalter is also president of Magna Steyr (a role he’s held since 2007), a group that builds vehicles in Graz, Austria and runs its own global supply chain for vehicle assembly and in areas such as roof, battery and fuel systems.

Despite these responsibilities, logistics is clearly a priority for Apfalter, as he takes time to meet Automotive Logistics during a special visit to the Magna Logistics Days, an event held during mid-October in Leibnitz, Austria for internal logistics managers at Magna in Europe as well as for logistics providers.

Apfalter maintains that logistics at Magna is not just about moving material between suppliers and plants, but is crucial to the company’s organisational structure. Like other large tier one suppliers, Magna has been a product of numerous acquisitions, mergers and restructurings over the years. The company, with its several divisions and more than 310 global plants, has a very decentralised management approach. So much so that Apfalter’s job as president for Magna Europe is actually parallel in many ways to his position as president of Magna Steyr. Logistics is part of what brings together many of the disparate parts of the organisation.

“Our decentralised culture has meant that logistics is playing more and more of a role at Magna,” Apfalter says. “Our European team is doing a great job in optimising the value stream between our partners, suppliers, customers and our plants.”

Apfalter says that logistics helps Magna to act more like “a fleet of speed boats rather than a tanker” when it comes to adjusting its production or supporting customers, for example. He stresses that, with the supply chain so interconnected globally, logistics has even less room for failure, particularly during vehicle launches.

“[As president] you don’t watch logistics all the time, but if you have problems then it comes to the surface very quickly. If you’re missing parts during a launch, and you have to fly parts from Mexico to Japan, the costs just explode,” he says.

Acting like a big company in the supply chain

Reactivity and flexibility are essential for today’s tier supply chain; but so too is a supplier’s ability to have scale in its operations and among its own supplier base. Klaus Iffland, vice-president of purchasing and logistics at Magna International Europe (pictured right), says that logistics is part of what allows the company to maintain its decentralised organisation, “but to act like a $30 billion company in the market”. 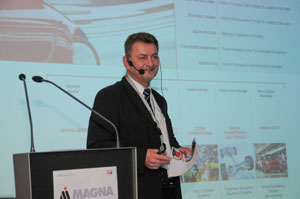 He points to in-house planning and sourcing tools that Magna uses in Europe to run effective tenders, design transport flows and determine the appropriate packaging for material. Many of these tools and operations are increasingly bundled together between Magna plants by Magna Logistics Europe (MLE), the group’s central logistics planning and purchasing team in Europe. MLE also works together with a steering committee made up of logistics directors from each of Magna’s groups. The organisation is unique for Magna globally in terms of combining more logistics flows and management across divisions.

“This structure really allows us to work as a big company in Europe, where we bundle volumes and optimise services as one supplier rather than as 120 small-to-medium-sized companies,” says Iffland.

Two years ago, Magna brought together logistics with purchasing in an effort to better understand total supply chain costs. While Iffland admits that material costs still tend to drive locations in the supply chain, he says that having an accurate view of total logistics cost can impact contract and operational decisions. “It’s very important for us to know the logistics implications, as well as for our customers [to understand our logistics cost],” he tells Automotive Logistics.

Apfalter stresses that OEM customers ultimately drive Magna’s supply chain and production locations, and that logistics must react according. “You have to be a globally acting supplier. When BMW is going to China, you have to be there and be localised to optimise the logistics chain,” he says.

“The advantage of Magna being a global company with 314 plants around the world is that we can follow these global customers,” adds Iffland. “We don’t need to ship parts around the world. We can transfer our knowledge from Europe to Asia or the other way around, easily and quickly.” 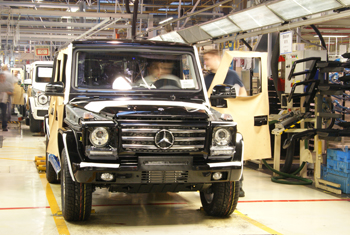 For Apfalter, logistics’ future role in this localisation will also become more significant. He believes that lowering CO2 emissions and providing customers with more visibility about supply chain origins will become both a regulatory and operational requirement in the automotive supply chain.

“Logistics is going to be more and more of a differentiator, especially as we talk more and more about CO2 emissions from ships, planes and trucks,” he says. “If I were a politician, I would award those companies that have excellent logistics and supply chains rather than hauling equipment from one side of the globe to the other.”

Apfalter even foresees the day when car parts will have stickers showing supply location and emission generated in their delivery, similar to fruit labels in some countries today. “That will happen in automotive, too. Some progressive groups, such as BMW, are already looking in their supply chain for who is localised and who has the most optimised logistics and supply chain,” he says.

Strength in the European supply base

Despite the need to localise in growing markets, Apfalter is nevertheless adamant that Magna’s European production and supply base will remain strong, particularly in Germany and Austria, where it has 49 and 17 plants, respectively. While he expects that western European markets will remain saturated, the company’s production and supply chain here will continue as important centres of volume, value and innovation, even as Magna invests further in markets like Russia, where the company now has five plants.

Magna International’s financial results both in Europe and globally have demonstrated this duality to some extent. According to the company's half year financial report, core manufacturing regions in Central 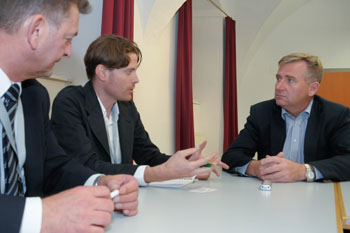 Klaus Iffland (left) and Guenther Apfalter (right) speak to editor Christopher Ludwig during the Magna Logistics Days in Austria
Europe and emerging ones to the east have driven a 10% increase in revenue in Europe during the first half, compared to just over $5 billion in 2012, and a 50% increase in earnings before interest and tax to $192 billion. The OEM production that the report credits with improving results in the region include the BMW Mini Paceman, Mercdes-Benz A-Class and CLA-Class, Ford Transit and Kuga, Skoda Rapid and Seat Toledo. Analysing the location of these models reveals a mix between Germany and Austria – the Graz plant builds the Mini Paceman and has recently revamped its assembly line for the new Mercedes-Benz G-Class, for example – as well as the Czech Republic, Hungary, Turkey and Russia.

Globally, Magna has also benefited from its footprint, balancing sales in stagnating regions with those of growing ones and by combining premium and volume brands in its customer portfolio. In total, the company saw revenue grow 12.5% in the first half to $17.3 billion, with earnings up by nearly 13% to more than $1 billion.

Despite the relative strength in Europe for the company, Apfalter does not deny that more growth will come from the east, both for Europe and globally. Magna’s global sales split is currently around 50% for North America, 40% for Europe and 10% for Asia.

“However, the Asian car market will continue to grow over the course of the next years, and of course Magna will adjust itself," he says.