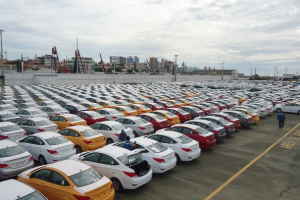 The northern Ecuadorian port of Manta is looking to expand its role as a hub for finished vehicles and this month reached its full storage capacity for transhipped vehicle volumes.

Manta only began operating regularly in the transshipment market as of July last year but in the third week of May handled around 3,500 vehicles, with calls from four major car carriers. Samuel Franco Caicedo, managing director of Terminal Portuario de Manta (TPN) noted that operations in the port have intensified with the arrival of greater levels of international trade. He attributed the increase to business that the terminal operator had secured, allowing the port not only to serve the local market but also an extensive hinterland.

Although TPM is a private Ecuadorian firm, it was set up in 2016 by Chile’s Agunsa Group, essentially to operate Manta International Port Terminal for a period of 40 years. This is requiring major investment to establish Manta as a deep water harbour and logistics terminal.

Agunsa was the only bidder for the project.

The new business is all the more welcome given the port of Manta's troubled history. In 2009, Hutchison Port Holdings unilaterally abandoned a 30-year container terminal concession, after having invested $20m, citing changes to its concession agreement imposed by the government.