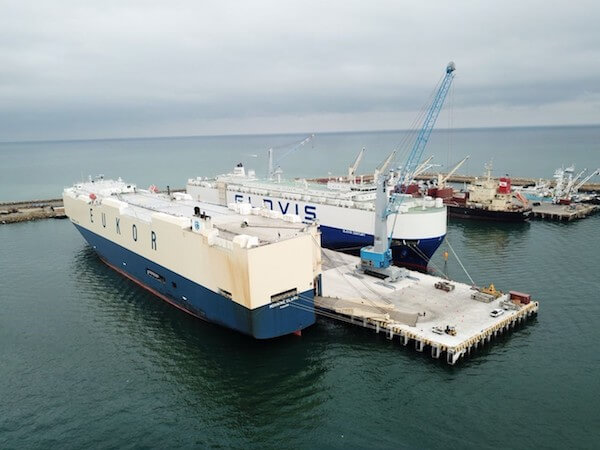 The port of Manta, in northern Ecuador, has reported a doubling in the volume of finished vehicles it handled over the first seven months of this year to 42,056 units, compared to 20,691 units in the same period last year.

Roberto Salazar, president of Manta Port Terminals (TPM) – the private company set up by Chilean concessionaire Agunsa to run the port – said Manta was on track to top 65,000 units by the end of the current year, compared to a total of 45,000 last year and just 14,000 during 2016. The poor performance in 2016 was down to import restrictions and an earthquake that hit the port’s international terminals, said Salazar.

Manufacturers including Kia, GM, Hyundai, Ford, Great Wall and Mazda use the port to import new vehicles and, increasingly, as a transhipment platform for other countries in the region. Transhipment business has grown this year to 1,519 vehicles in the first seven months, compared to just 193 vehicles in the same period last year.

TPM, which took control of the port in March 2016, has overseen a major dredging project allowing the draft to be deepened to 13 metres to accommodate vessels up to 340 metres long. The shipping lines currently calling at the port include Glovis, Eukor, WWL, CSAV, MOL, NYK and Höegh.

To date, around $31m has been invested in the port as part of a first phase of development that encompasses repairs to earthquake-damaged parts of the port and installation upgrades, as well as the development of new infrastructure, equipment and security.

Finished vehicle port developments in South America will be under discussion at this year's Automotive Logistics South America summit which takes place on November 28 in Sao Paulo, Brazil